WOW! DECEMBER IS FADING FAST AND I ALREADY GOT MY CHRISTMAS GIFT

My 21 days of Daniel fasting is done and has been a true blessing in many ways.  Even when there have been so many twists and turns with covid related cancelations and frustrations and serious sickness in my family, my prayer life gave me so much peace and surrender that I haven't felt stressed at all this December. I have no power to change anything so I just surrendered it all to Jesus.

I lost a few pounds just eating veggies, fruits, nuts, berries, and a little bread and some water, but I know it will probably come back on during the holidays.  It's been a long while since I last posted and I never know where to begin.

I got the news that my brother Leo was transported to the hospital by ambulance when he became paralyzed and confused.  Leo is the grandfather of the 14 years old girl, Madison Roy-Boudreau, who disappeared in Bathurst on May 11 of this year.  She has been declared murdered by a pedophile but her body has never been found. Her phone was found at the bottom of a river, some of her clothing and her blood in the box of the truck. This has been an extreemly difficult time in his life.

Leo had been struggling with his balance and had to use a walker since May. Then, he lost the ability to sit and walk and kept falling and could not get up. Leo is one year older than me. They found a very large tumor on his brain, 3in X 2 1/2 in, the size of a big egg on his right lobe. The biggest brain tumor his neurosurgeon ever saw. Leo's brain was swelling, causing other problems which complicated the matter.

After some delays to transport him to a larger hospital because there were no beds available because of a sudden increase of Covid cases, he finally was transported, and to make a long story short, was operated on. His very risky operation was scheduled to take 12 to 15 hours and was done in only 6 1/2 hours. After the operation, he was awake and talking and even ate applesauce. He regained the movement in his arms and in one leg but his brain was still swollen. They were going to put him in intensive care for 3 to 4 days but after the first day, they were considering taking him out of ICU.  It was a very risky operation but he surprised the doctors with his speedy progress. I haven't received any updates today. He was very lucky to get in surgery as they are canceling scheduled surgeries because of a spike in new cases of Covid.

This was the best Christmas gift the family could hope for. There were a lot of prayers by many, many friends, and family and surrender to God's will for the outcome. We are all so very grateful.

The only Christmas decorations I put up were a wreath on the front door, a poinsettia, and a nativity. That will be so easy to put away come, Epiphany.

I've been hooking a little on Mary and Child rug but stopped when I didn't like how the blue mantel looked. I started to dye more shades of blue but had to stop to get my Christmas baking done. So, it looks like  I'll be pulling most of the wool on the blue mantel and try again with more subtle shading. I also will be ripping out the darker blue marking in the baby's gown. It's just too dark.  The baby's upper lips also need some proper color and a little tweaking. 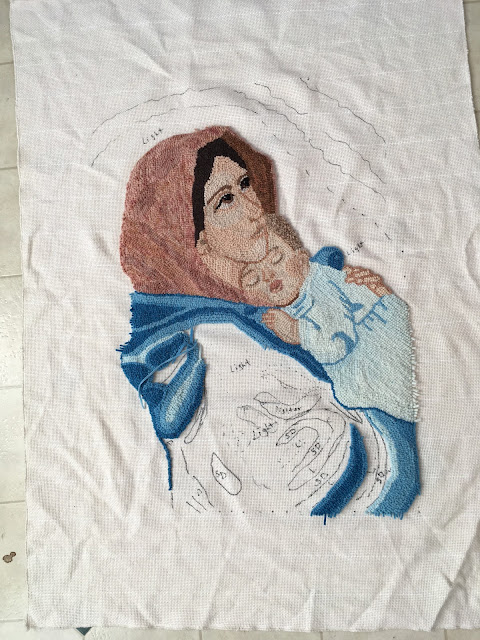 This first picture was taken in the day time 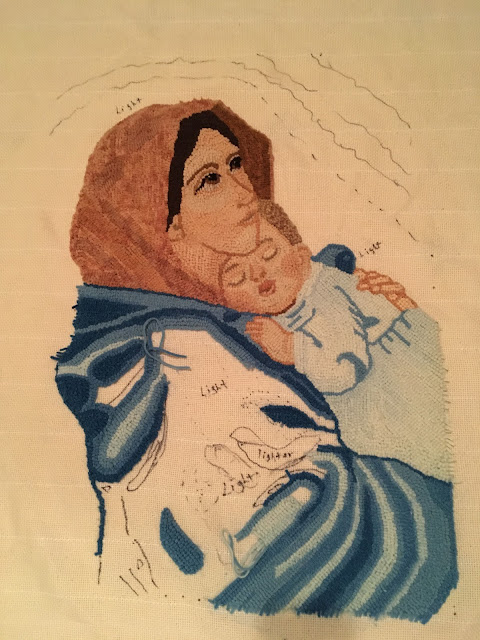 This one was taken at night with poor lighting.  I got a little more done in this photo.  I really don't like how the shading turned out so it's all coming out. I find this type of shading very challenging to do. I'll try with more subtle shading when I get all my wool dyed.

I started crocheting a baby blanket using a new pattern. I can't sit for a long time because it causes my back to ache. I really like to crochet and find it relaxing when it's an easy pattern. 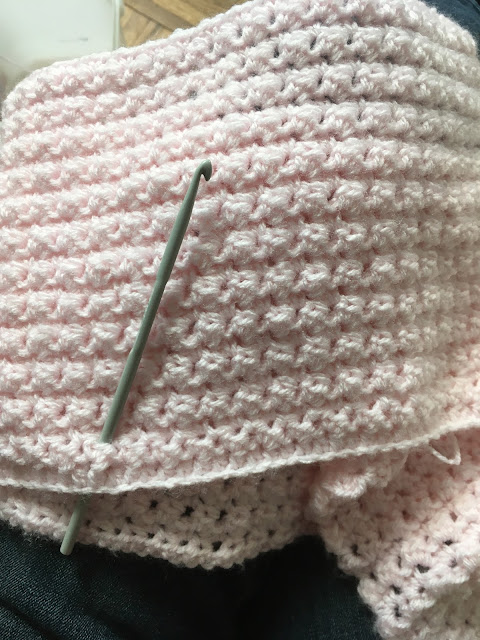 No family again for Christmas this year but we will have a turkey dinner with all the trimmings which we will share with two households. I'll prepare some care packages so they will be well fed at least.  I've got my Christmas baking done, but I still have to make more meat pies to give away.  I made two a few days ago, one for us, and one for my son Vaughan. They turned out very tasty and quickly disappeared. George and I  are not exchanging gifts as we are old and have everything we need. It makes life easier in this time of Covid. No need to go shopping. The rest of the family gets money to buy something they can use.

Merry Christmas and Happy Holidays everyone. Wishing you good health.  Stay well and safe and find something to be thankful for and then, we'll hang our new calendar and start all over again.