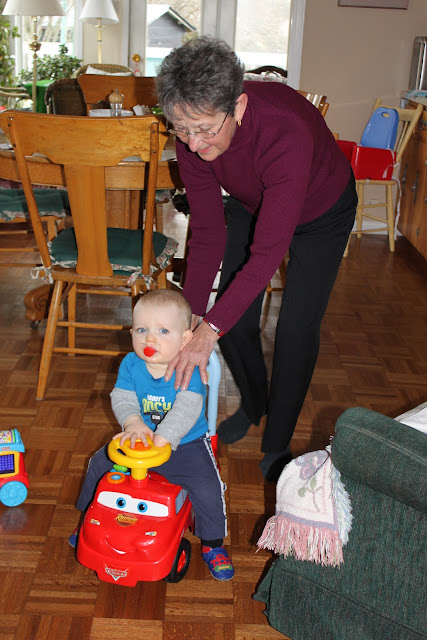 Since I promised some Christmas photos here's a one of yours truly with grandson James on his  new fire truck with all the bells and whistles. He used his stump to push on the buttons that he liked and it was some real disco type of music and we went around and around the house till the back gave up and someone else took over and James just loved it and kept us busy and entertained and the process was repeated all over again while the other ones rested their back. The truck came from Grandpa McDonald.

I forgot my camera as we rushed to my daughter and son in law's new house for Christmas dinner after work so no pictures for this. Dinner was absolutely wonderful, the bird cooked to perfection and we even had the traditional present game after dinner with great surprises... It's like a Yankee swap game.  We had lots of fun. 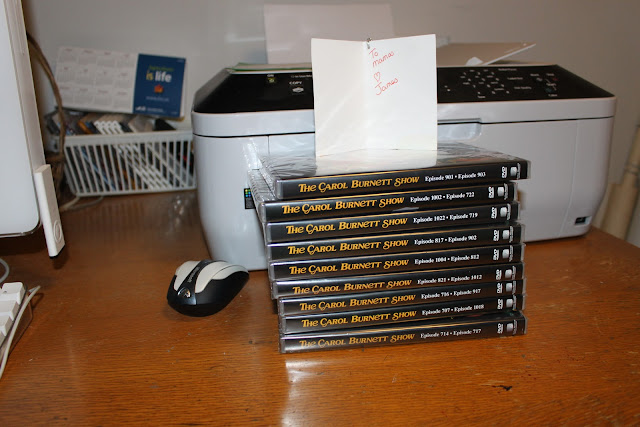 Since my daughter Christine reads my blog and read that when I need a good laugh I go to You-tube and watch old episodes of the Carol Burnett show, she bought me some Carol Burnett DVDs, although it says on the card, from James.    Now I have hours of viewing entertainment. 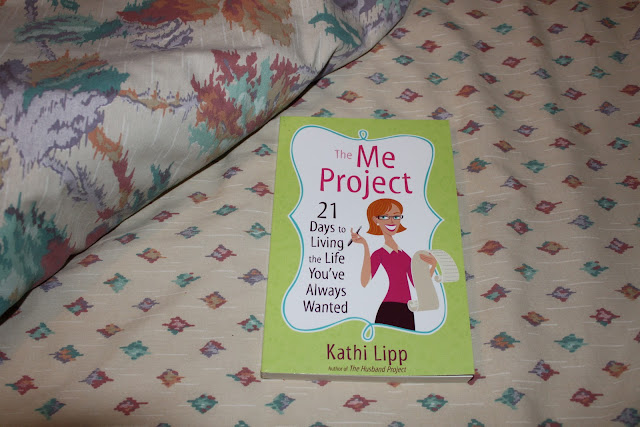 How lucky can I be to have  receive this The Me Project book as a gift,  on time for Christmas from my good  blogger friend Patrice of Everyday Ruralty. I started to read it and I hope that I'll be able to follow the directions to be what God wants me to become. One of the the things Patrice and I have in common and we didn't know until we made contact by email and mail is that our last name are similar and we both live on our own roads. I think that it was awful sweet of her to send me this out of the blue.
Thank you so much Patrice. You are a sweet and generous friend. 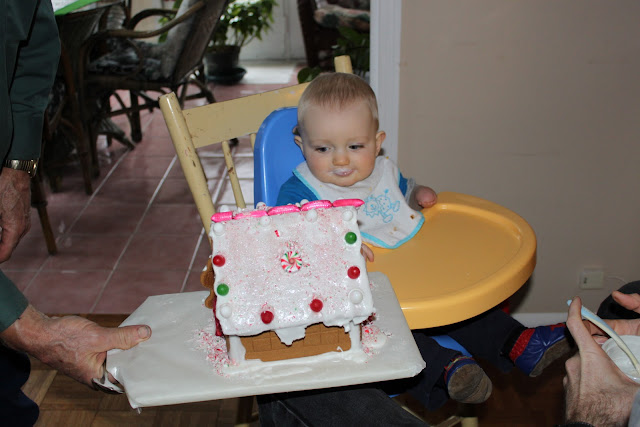 I bought an assortments of candies to make a gingerbread house but with all the calves being born around Christmas I didn't made it and the kids munched on most of the candies. My daughter assembled the gingerbread house with what was left and sprinkled some crushed peppermint candies on the roof. I didn't buy the meringue powder that was supposed to go with the kit so my daughter made the best with what she had and James seems to like it just fine. The kids and the adults ate it like a tornado went through it.

Next year I'll be prepared. We are having a gingerbread contest. Because of distances to transport the gingerbreads,  pictures with the author will be allowed. There's a whole year to prepare but I bet everyone will wait till the last minute, but Hope reign eternal. 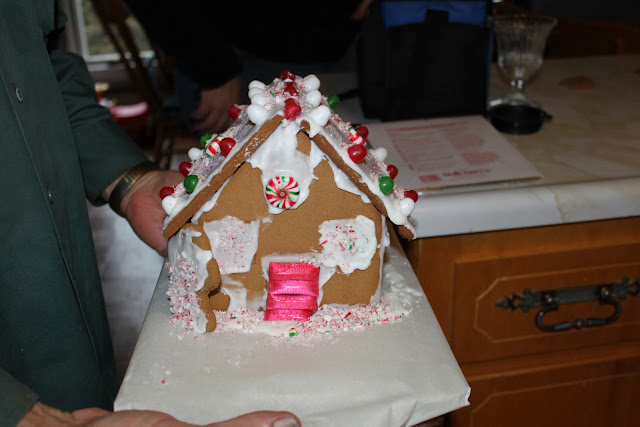 My husband is showing the front. Even chickenbone candies were used for the door. 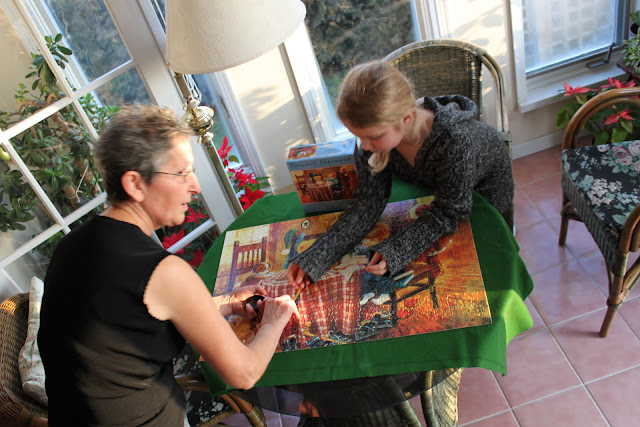 I told you of our tradition of making puzzles after Christmas and we made three in all.  This was a difficult one. Here is an unflattering photo of me with my cute granddaughter Nicole. I no doubt was keeping an eye on James. 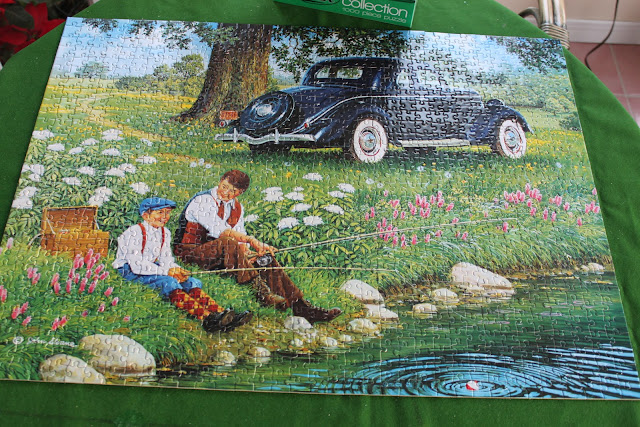 Another puzzle finished after having sips of wine when we placed a piece near the end. We would say sippy sippy. When a piece didn't fit where we thought it should fit  we called it missy sippy. Then the laughter. This one was easy enough. 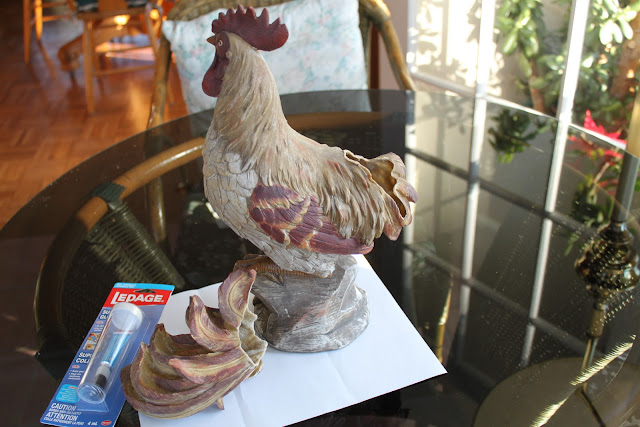 The only casualty was my Claire de Lune resin rooster that got knocked down by James and the tail broke off. It's my fault for not putting it in a more secure place. I had so many Christmas decorations that there really was no good place for it. 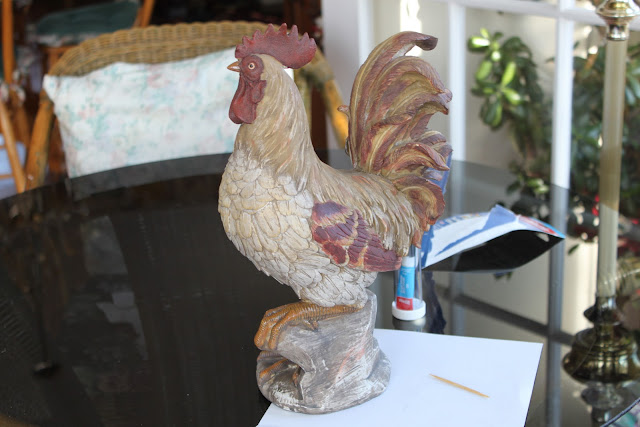 Here the tail was attached with super glue and you can't even see that it was broken.

I finally got my Christmas tree down and put away for next year. It took me longer to put all the Christmas decorations  away this time as I organized everything in clear totes and labeled everything. Being married for almost 46 years in February you can understand how much decorations I've accumulated, and all those cheap Value Village bargains...

I never took pictures of all the totes,  I'm not that organized, but believe me, there's a lot. The totes are so big and take a lot of room so I'll have to set up the metal shelves downstairs in the basement so that they will be high enough in case of a flood, God forbid... 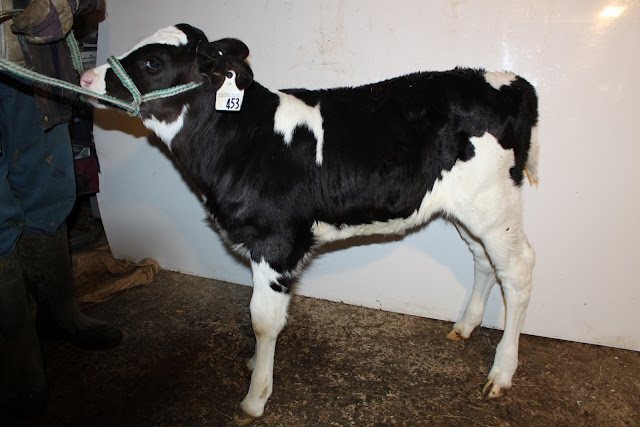 This week was registration for our Holstein calves. I had no more room in the nursery and had three of them in one big pen and were loving it. This Dancer,  She loves to jump around and the name fits her. We take photos of both side for their registration papers. 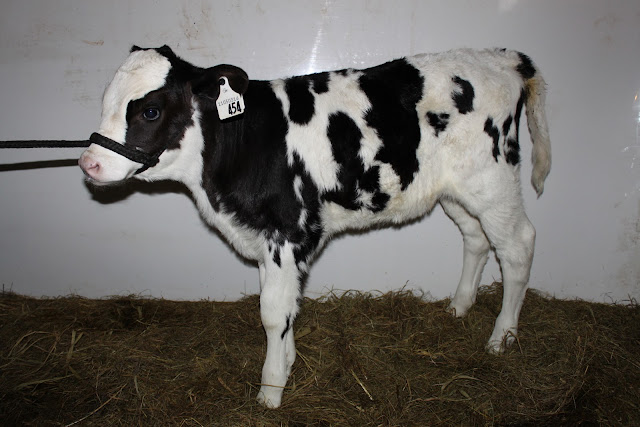 This one was called  Prancer, she jumps around too but we call it dancing because she has her own style.
She had a yellow ribbon around her neck to identify her at first but she managed to pull it off but it didn't matter because we had her tagged by then. 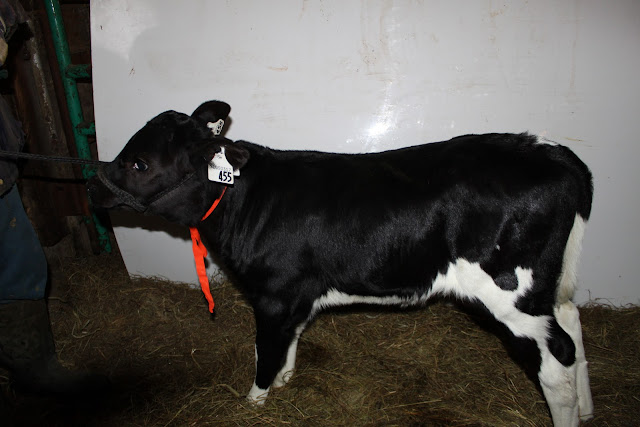 Who do you think this is? Well it's Vixen of course and she is so beautiful but she really is a vixen. She  still has her original red ribbon around her neck. 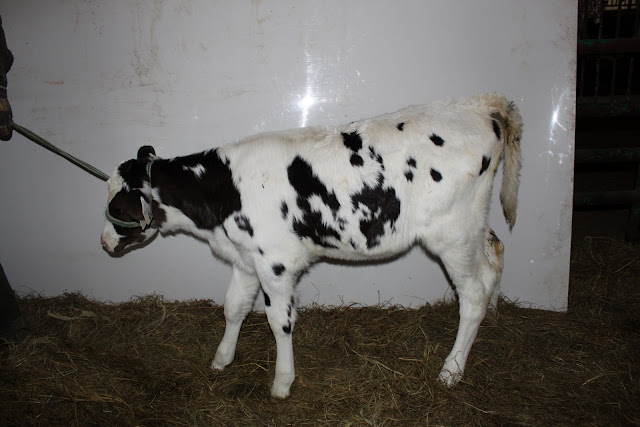 This one we called Mademoiselle because that's what came to mind when I came around to name her. She is gentle and not pushy like some. I imagine it would be easier to wait longer to see what they are like but because of registration I had to do it hastily.

My triplet calves came down with winter dysentery ( watery diarrhea)   this past week and it has slowly spread to all 11 of my small calves. I've been keeping their bedding dry and their pails clean and giving them electrolyte and following the vet's recommendations. He said to continue doing what I was doing.
Four are now better and some are starting to feel better. It's no fun..... for me and for them.

Again I apologize for having a long post as I have some catching up to do.
Thanks for stopping by and you know that I cherish your comments.  Stay warm and safe.  JB
Posted by Julia at 10:40 PM 27 comments