As I promised Annie,  a blogger friend, here is the little poem I was inspired to write  on April16, 2009. It has not been refined and is raw as I scribbled  it in my little note book after a very busy day.  It's called God is busy. I hope you enjoy reading it to reflect on some of the gifts we receive from God.

God is Busy
Busy is a word I use often, God is busy too.
He's busy breathing new life in his creatures, big or small.
He's busy sustaining the world he created.
He's busy holding the sun, the stars and the moon in their orbits.
He's busy making the streams flow and the ocean roar.
God is busy.

He's busy making sure that colors are beautiful and the sounds are heard.
He's busy with the song birds with each feathers of their plumage.
He's busy growing fruits, berries and vegetables.
He's busy warming the earth.
God is very busy.

He's busy loving us and showering us with gifts.
He's busy healing our hurts and diseases.
He's busy caring for us.
He's busy inviting us to his banquet.
But He's never too busy to listen to us.
God is busy.

Yes God is busy too.
He's been busy for a very long time.

By Julia Bourque.
All copyrights reserved.
Do not copy without permission from the author.

I welcome your comments and wish you a great weekend as we get ready to turn another calendar page.
Hugs, JB

Email ThisBlogThis!Share to TwitterShare to FacebookShare to Pinterest
Labels: God is Busy poem

Of course when we were kids, we didn't had white goo or Play Doh to play with but I can remember helping mom make bread and I loved playing in the dough. It was warm and gooy and I would add more flour to make it into a real bread dough. I could even shape them into loaves at 8 years old way back then.  It was more play than work.

These are pictures that I got from my daughter Christine on March the 4th. James teacher sent these to her with this quote. 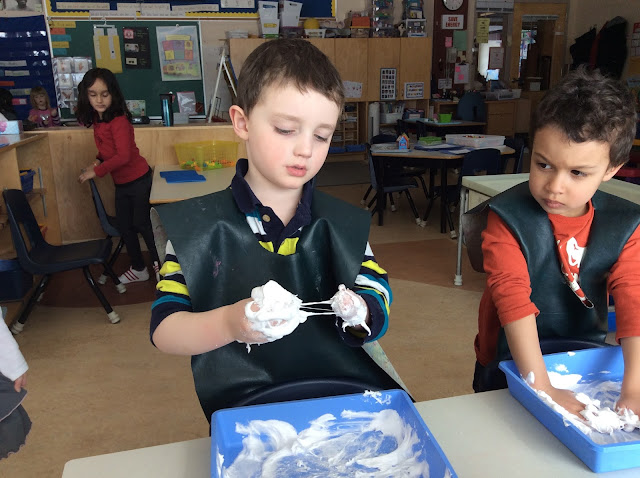 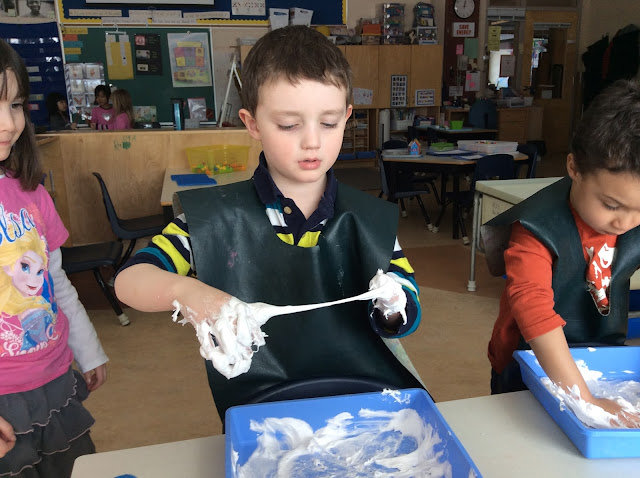 This is me and I'm stretching the goo. It's smooth, soft, squishy, stretchy and sticky. I got to wash my hands now.
James is 5.

I hope you have a great day. Thanks for the gift of your comments.
Hugs,
JB
Posted by Julia at 10:58 AM 29 comments

Email ThisBlogThis!Share to TwitterShare to FacebookShare to Pinterest
Labels: James and goo

CAN YOU HELP ME IDENTIFY THESES VISITORS

I was working in the office yesterday when I saw a flock of birds hoping around eating crabapples of my tree in the front yard. At first I thought they were juvenile cardinals but they did not look like the juveniles in my  bird book. I checked on the Titmouse but they didn't quite looked like those either. They have some bright yellow on the tip of their tails and some yellow and red on their wings as well as black and white. If you look carefully, you can see a little tuff on the top of the heads when their heads are up. 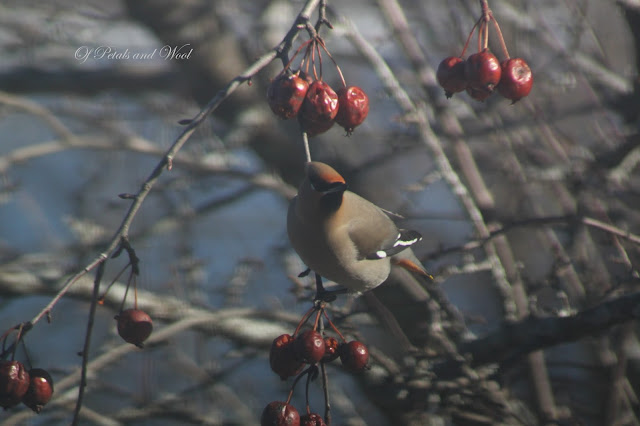 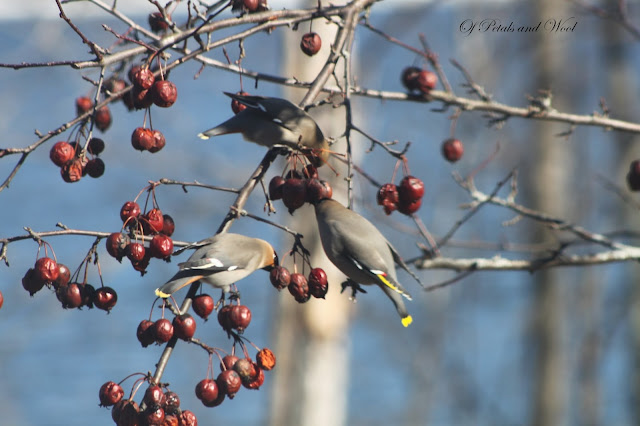 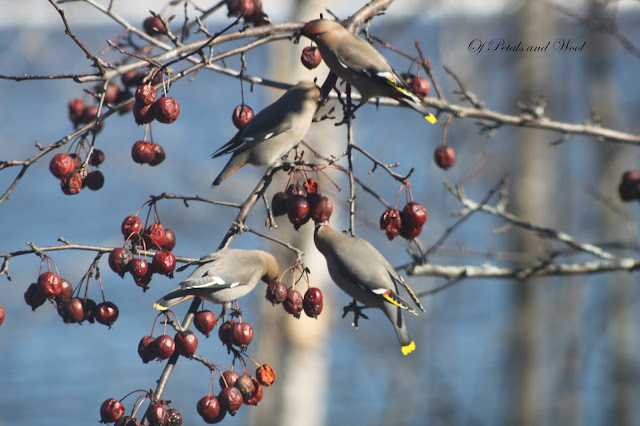 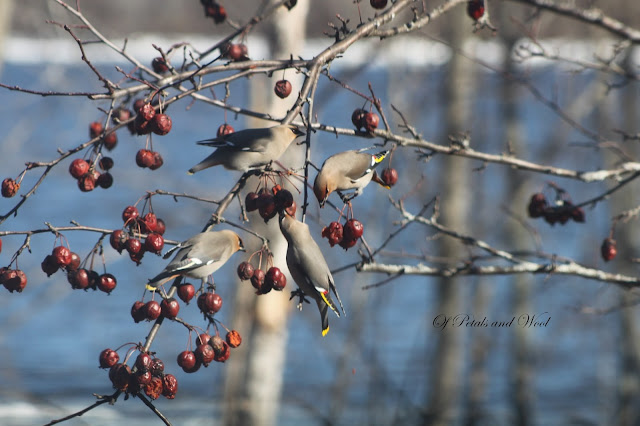 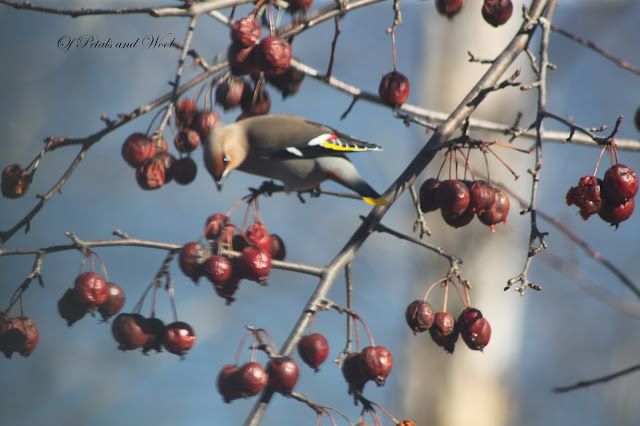 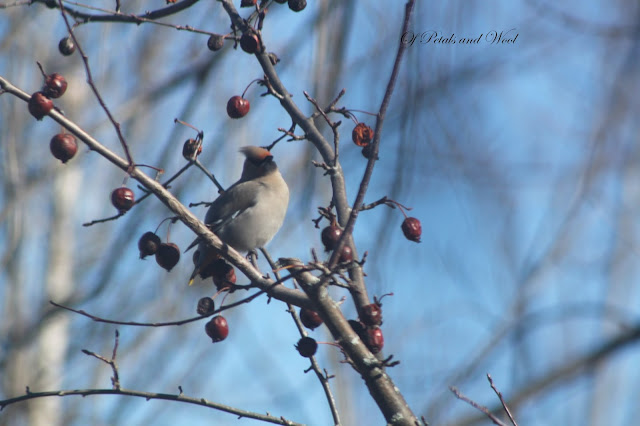 Sorry, the quality of the pictures is very poor.

There was about 12 to 15 in my tree and I took the pictures through a dirty double pane window with my zoom lens. I wish I could have gone out to take clearer pictures but they were quite in a feeding frenzy so I let them be. They would have been camera shy anyway.

I sure hope you can identify what kind of birds they are.
Thanks for stopping by for a little visit.
Time changes forward on Sunday and it's looking more and more like Spring is trying to poke holes in Old Man Winter to get him out of the way.  It's warming up.
Thanks for your comments.
Hugs,
JB
Posted by Julia at 4:00 PM 28 comments

Email ThisBlogThis!Share to TwitterShare to FacebookShare to Pinterest
Labels: New birds in my tree

I DID IT MY WAY

I finally finished printing all my blog posts from 2010 to 2015 with comments. It took a lot of ink and a lot of time but at least it's done. I have a small section that are missing the comments as I had no way to retrieve the comments as they were erased purposely from my emails a long time ago. Had I known I could have used them as link to print my deleted blog posts, I would not have erased them of course, but it is what it is... I haven't calculated how much I spent on ink and paper and I really don't care. 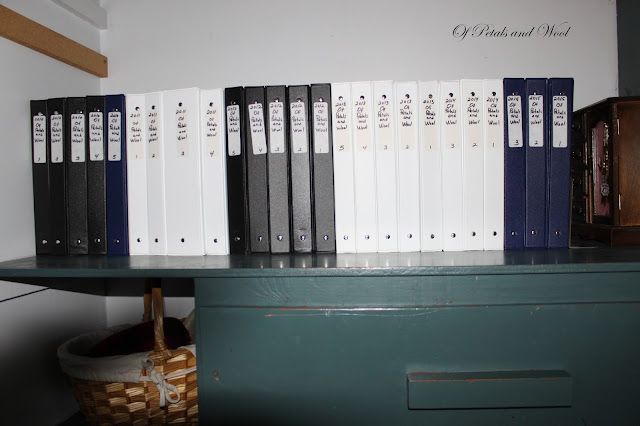 I've reprinted those posts that I first printed without comments as I feel that the comments were so important to me. The joy I felt at reading all those comments through the years from my friends in good times and in bad and appreciating all the support they have given me, made it an easy decision for me to print the comments. It has convinced me that I should keep on blogging.

The comments that we receive from friends are really the catalyst that keeps us blogging and it's a sharing that goes beyond borders and continents, religion and race. My blogger friends are a diverse group of individuals  with a diversity of interest who are most generous with their positive and encouraging comments and they are also loyal and helpful.

I gained a tiny bit more experience with printing my own blog. It would have been nice having them in book form but I think they would have been very pricy with comments. I know 25 binders is a lot but they are printed on one side of the page only. I really enjoyed reading a lot of comments from my dear friend Kim of Millie's Mat who was one of my earlier followers shortly after I started blogging. We were both commenting with a lot of humour even way back then and we still do.

I post less often now because of lack of spare time but I hope I'll be able to keep it up.

On a sadder note, I just got back from my niece Lise's funeral in Bathurst and I was gone for three days. I went by bus because of the storm and it took double the time to travel by bus  than when I go by car. To save money, they go the long route instead of doing two separate trips.

Lise was only 34 and died after a lengthy illness. She was always positive and looked on the brighter side of things. She was given a year and a half to live but she only lived for one short year after diagnosis. It was a bitter sweet event as I hadn't seen my family since my mom passed away in 2009. Thank you to all of you who emailed me with your condolences. I'm sorry I never had a chance to post to let you know I would be away from the computer before I left. It was pretty hectic for me to get ready and as soon as I got the word of when the funeral would be.  You wouldn't believe how much snow there was in Bathurst after the storm. Some places got freezing rain and the north of the province got snow and wind.

Thanks for your visit. I so appreciate your comments.
JB