A LITTLE PROGRESS DURING COVID-19 ISOLATION

Despite being in self-isolation, I haven't felt the stress of not going shopping but since I can no longer go to church, I've been finding more time to pray and have found some wonderful communities online who share my faith and we meet often by Zoom to pray and share stories of our faith.

I've been baking bread instead of buying it and baked a lot of fluffy biscuits and scones. I made a lot of soups and I've been using what I have in my freezer and pantry instead of buying more than I need every time I see something on sale at the grocery store. I only get the basics like fruits and veggies and odds and ends. It's time for a run to the grocery store. I've made a long list.

Although we have been under the threat of flooding again this spring, so far the river has not spilled its bank here except in the lower areas. The water came close to the edge of the Lane but it went back down. It still could rise again depending on the weather but so far it looks good. It will soon be fiddlehead picking time but the road to the fields are still too wet.

I didn't clean out the many flowerbeds last fall just in case it would flood again this spring and I wanted to try to keep the soil from being washed away. New growth has started to pop up and so I started cleaning some flowerbeds. I'm doing it slowly and I don't feel rushed. 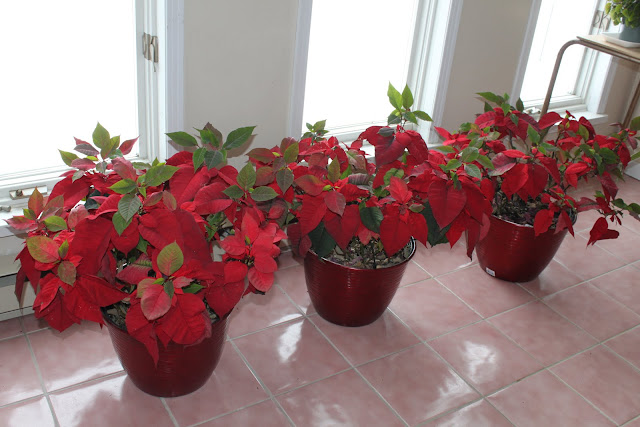 Just because it looks so bleak outside still, I thought I would share a bit of color.
Before Lent, I was given these huge poinsettias from the church because nobody wanted to take them home. The leaves had all fallen off except the red bracts.  They suffered water neglect but have started to grow new green leaves. 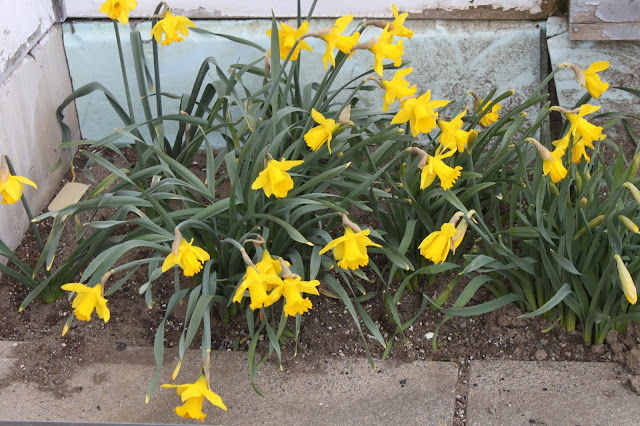 My next splash of color is these daffodils that grows in a sheltered spot by the back of the house.  It gets very dry there in the summer and is not an ideal spot but they have survived just the same.

Nothing much of interest going on in my life to show you but here are some before and after photos of my flowerbeds. 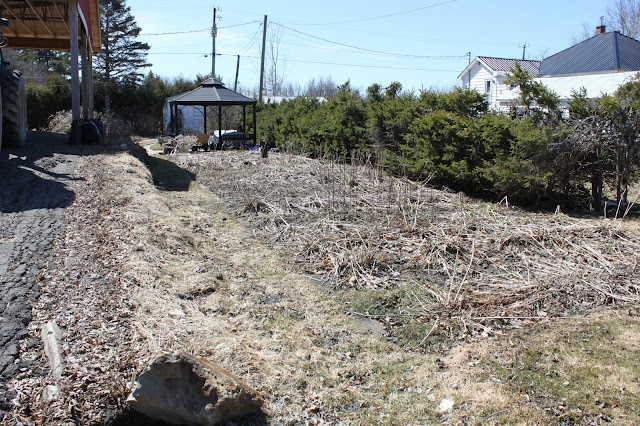 The before picture of the long daylily flowerbed and the rock wall flowerbed. Very yucky looking. 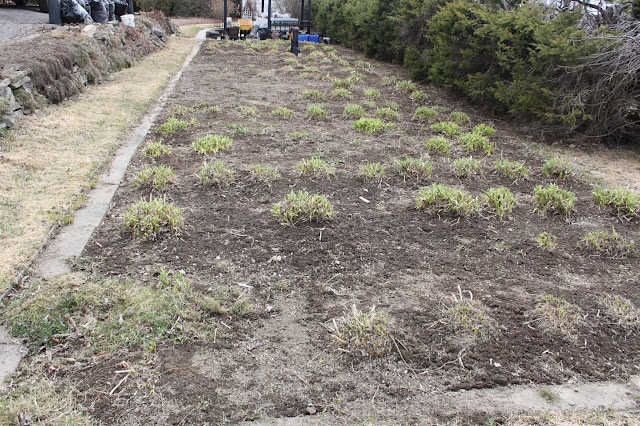 The after picture of the cleaned daylily flowerbed. The rock wall flowerbed has been cleaned but I'm only showing a portion of it. It looks a little better. 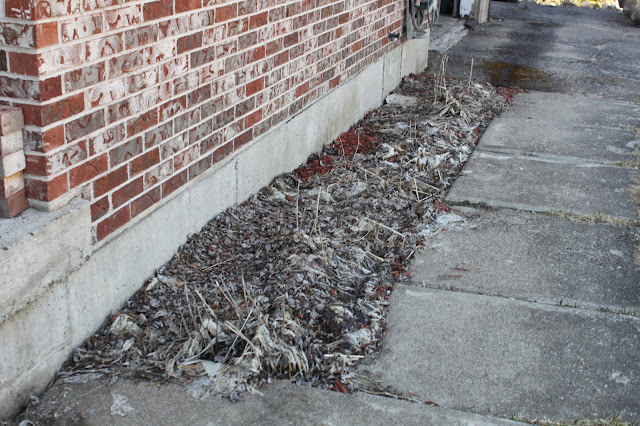 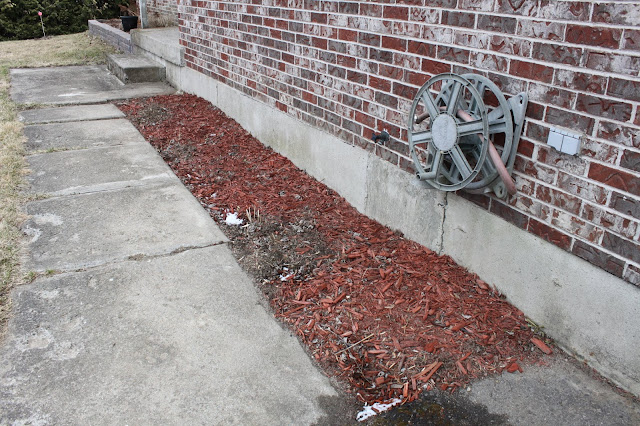 The Hosta bed cleaned up from the other side. 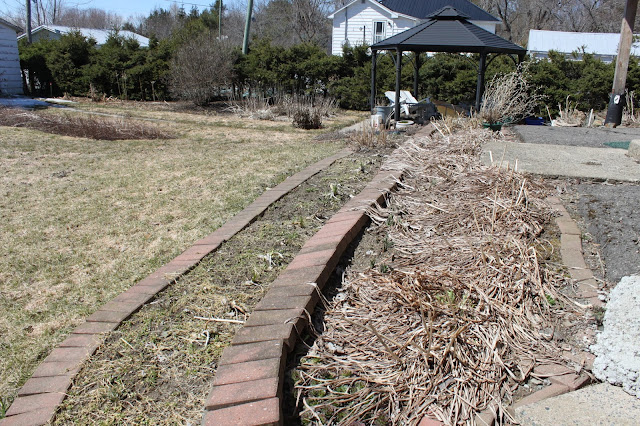 Before picture of the daylily flowerbed, yucky looking as well. 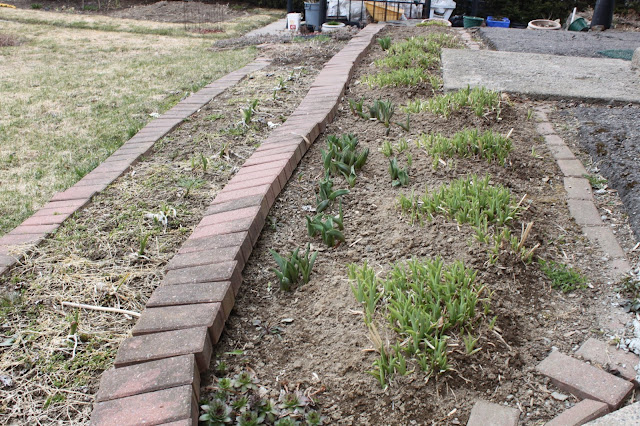 The cleaned daylily bed. Note the bottom layer is still not cleaned and is full of chickweeds. 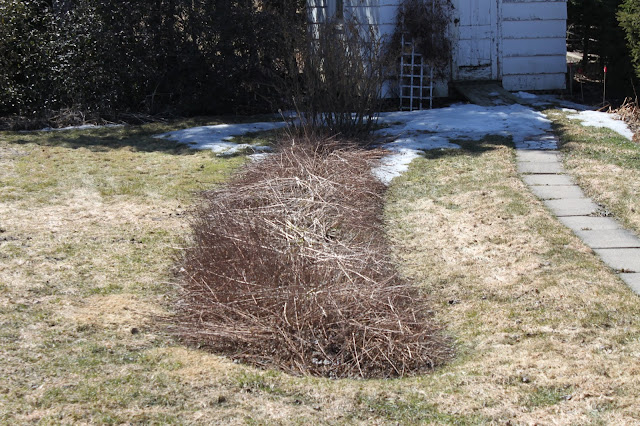 This is a before picture of the Sundrop garden when we still had snow. The snow is all gone and I'm almost finished cleaning it. I'll take a picture later. 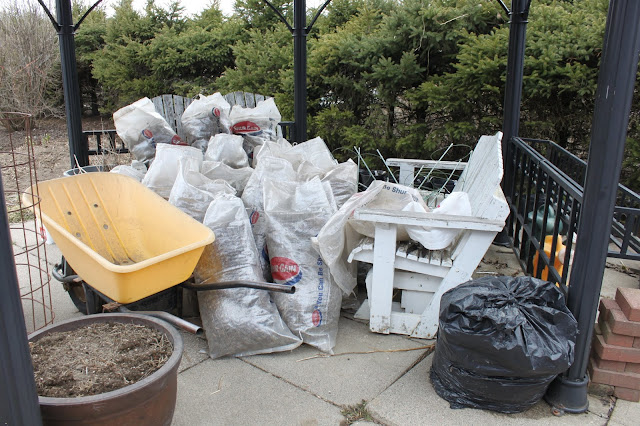 I saved all the dead plant debris and put it in feed bags to be made in mulch. My Gazebo is a good place to keep it dry until I mulch it with the lawnmower. 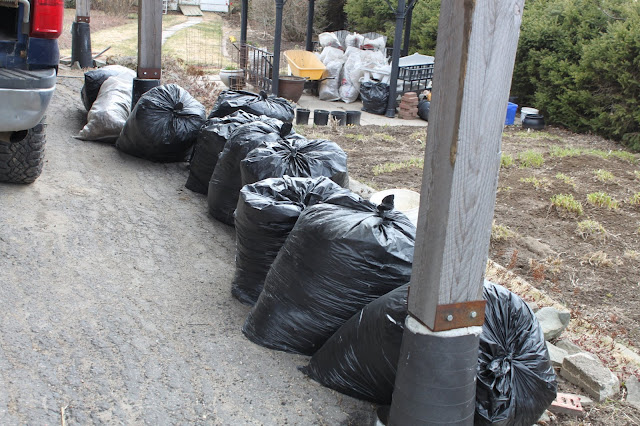 Here's another bunch of bags full of dead daylily debris and the leaves I raked from the front lawn, also to be mulched.
I've cleaned more flowerbeds but didn't take any pictures.

That's it for today. Stay well and safe and thanks for stopping by and leaving a comment.
Hugs, Julia
Posted by Julia at 9:22 PM 15 comments

A Doctor Explains How to Make the Safest Face Mask

I thought I would share this video on how to make face masks out of Hepa vacuum cleaner bags.
This doctor's wife is showing how. Pretty ingenious.

So fare we are still OK and I hope everyone is all safe and well.
I'm enjoying this warmer weather and the snow is almost all gone from the yard. We still have a bit of where there were heavier snowdrifts and in the shade. I checked my blueberry bushes and I saw that the deers ate most of the branches on the first one. I can see their hoof prints in the garden. I see the eagles are carrying nesting material every day.

I've gotten pretty lazy from staying home but I'm keeping busy and so far I'm not yet totally bored.
I cleaned my dining room parquet floors on my knees. I did half of it yesterday and I finished the rest today. I have a bum shoulder with a loose socket so I'm being slow.  Soon I'll be able to clean the flowerbeds when it dries up a little, right now the soil is pretty soggy.