AS THE WORLD TURNS, I'M GETTING SLOWER AT POSTING

It seems to happen a lot more to bloggers lately that they slow down in posting. I've been hesitant to post because my computer isn't working at maximum capacity with my hard drive being almost full and my iPhoto library  running out of space so I've finally deleted some duplicate photos to make room but it was a very tedious and time consuming job. I'm still getting the same message that my iPhoto is running out of space but I finally managed to upload a bunch of photos anyway.

My daughter Christine announced that she misses reading my blog lately so here Christine, this post is for you

In May Christine bought me 2 plane tickets to go visit her for a week for the Tulip Festival in Ottawa but it rained almost every day I was there. I did get to see the tulips but forgot to bring my camera. I had only one sunny day and I spent the afternoon outdoors weeding her little vegetable garden. I even  managed to get two therapeutic massage while there.  Sleeping in late was also a treat. No getting up at 5:00am.

Prior to leaving for Ottawa, we received a shipment of my daughter Nicole's personal things from Glasgow Scotland that we wanted to keep. I unpacked it and put everything away to be sorted out later. 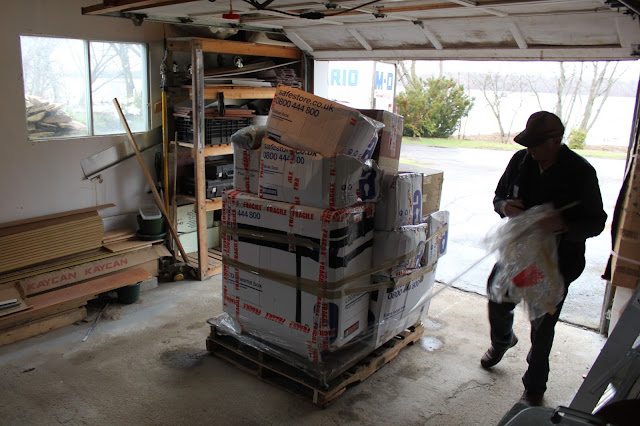 There were 18 boxes of Nicole's stuff on pallets. George used the tractor fork lift to take it off the big transport truck and deposited on the garage floor. It was a rainy day.  The driver was happy as it made his job much easier.


Here below are some photos of my visit in Ottawa at the beginning of May. 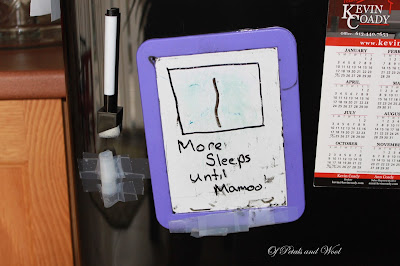 James was anxious for my arrival so he kept track of how many sleep until my arrival. How sweet is that? 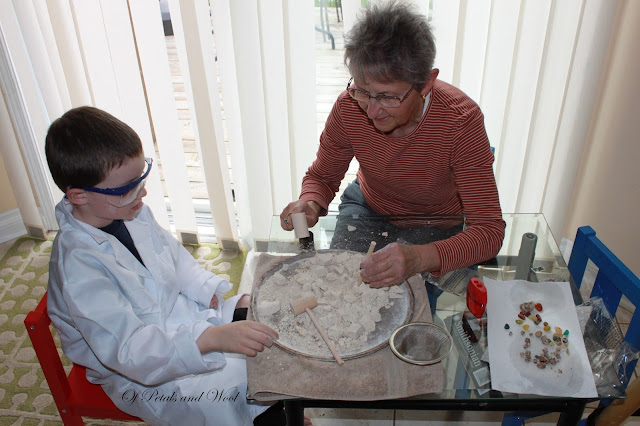 He had received two Smithsonian semi precious stones kits that had to be hammered  out of hard bricks with little wooden mallets and sharp sticks. James and I worked for a whole hour to dig out these stones. He got so excited every time we found a stone. I did help him some. Notice that he's wearing a lab coat and a pair of safety glasses. 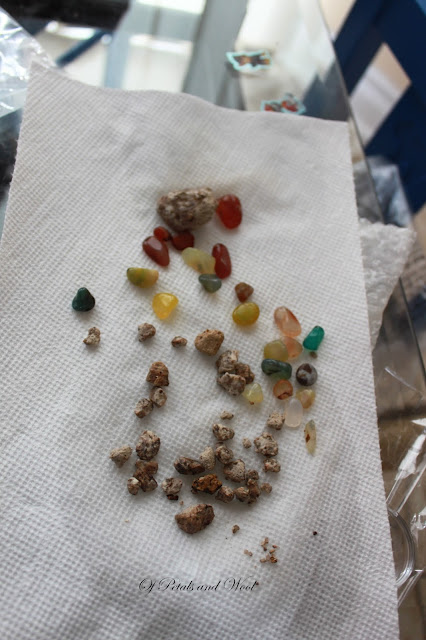 These are the stones we found in two bricks. 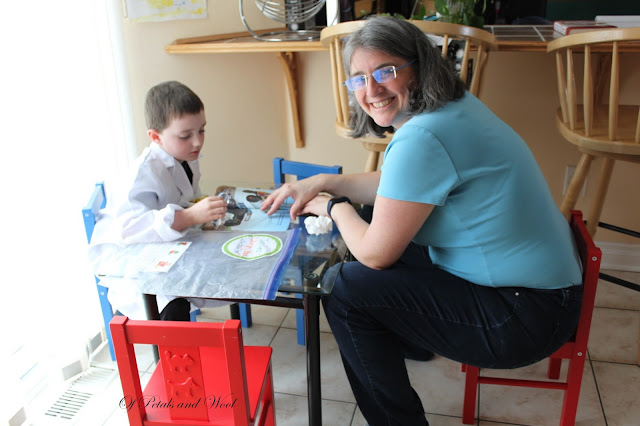 After the mess was cleaned out, he read a story to his mom.  James is in Kindergarten and is a good reader. 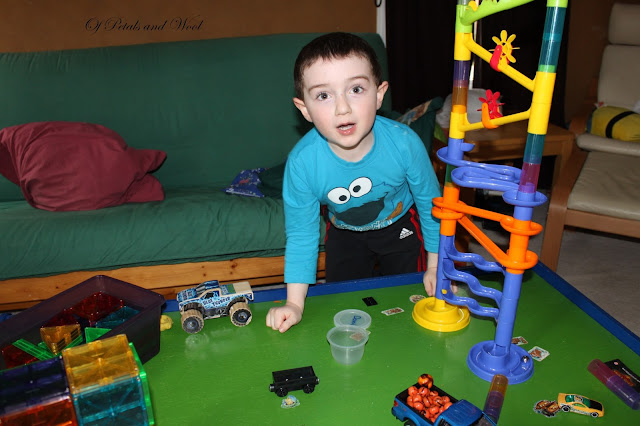 Daniel played a marble game all by himself. 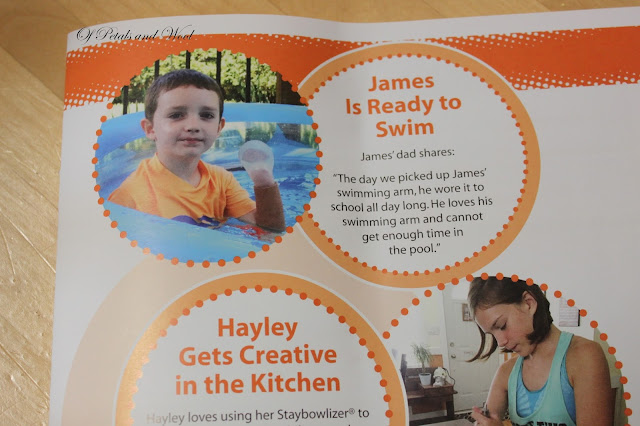 Again this year, James made it into the War Amp Champs magazine.  He was showing his new swimming arm paddle. James loves to swim under water with his new paddle. 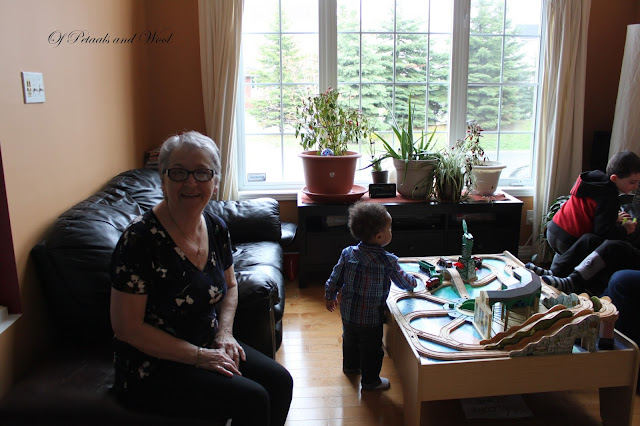 What are the chance that my sister Leona and I would be in Ottawa at the same time. She was also visiting her daughter who lives one and a half hour drive away from my daughter's place. It was a treat to see her and her family. 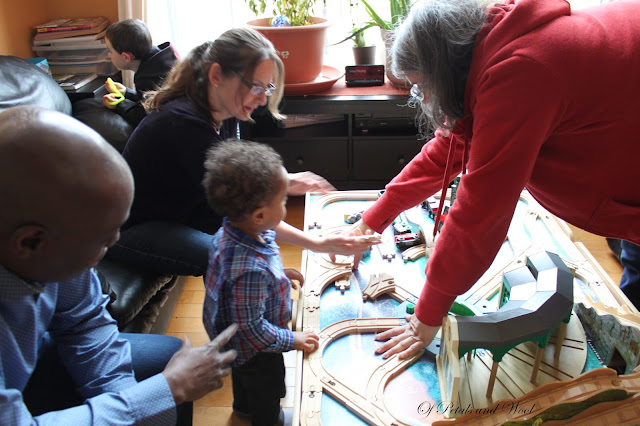 This is her daughter Linda, grandson Samuel and son in law Richard. 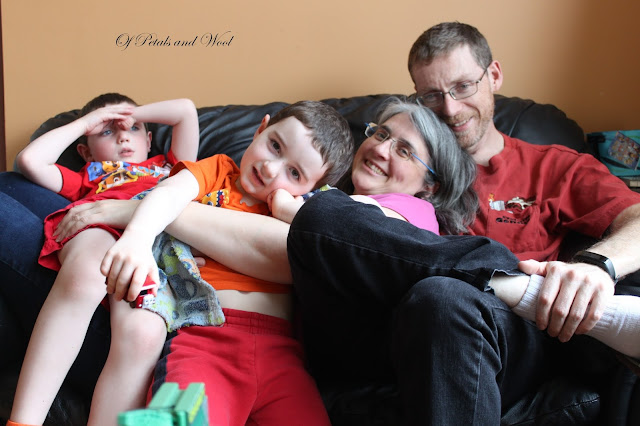 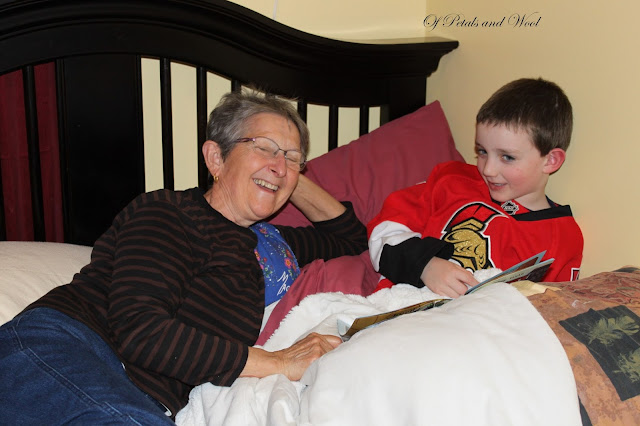 I was resting in bed and James came in and asked me to read him a book...  He said something funny but I can't remember what he said that made me laugh out loud. James is a Senators Hockey fan. He  loves to watch the hockey game with his dad and even wears a Senators jersey.

I hope I still have some readers left. I'll try to do another post next week.
Thanks for leaving a comment. I hope that you all have a great weekend.
Hugs, Julia