ALL CREATURES GREAT AND SMALL LIVES IN OUR BARN

I've been getting behind in my blogging so I thought that I may as well give you a cow adventure before I completely forget. I can't remember the exact date but I have it in my records at the farm. Sometime around the end of April.

One sign that a cow is ready to give birth is that she will usually stop eating a day before. She may eat very little hay and get restless and may have mucus discharge, tail up. I had noticed this in a heifer who was overdue. She had been put in the calving pen before  her due date but didn't calved so the pen was used for another cow for some reason or another.

Her udder was swelled up and I noticed that she barely ate so she was put in the calving pen again for observation. After work  I checked up on her and she was laying her butts against the gate so I got her up and I noticed  that she had a big balloon of embryonic fluid  and it busted when she got up and then I saw two hooves sticking out. I stayed around and it wasn't progressing. I came home to supper and told my husband to go check up on her as her water had broken earlier. He called back that he needed my help to pull the calf out as the delivery had not progressed at all.

Routine stuff, disinfect the  small chain with iodine in warm water to attach around the calf feet, get the ratchet winch ready with chain and a pail of disinfectant in water. Turn on the halogen lamp on for better light.The heifer is lured into putting her head in the headlock gate with grain, as soon as her head is far enough, a lever is pulled and voila, she is your prisoner.  So far so good, just routine for this kind of delivery.

My husband gets me to hold the tail while he attached the chain carefully around the calf feet and tried to get the heifer to move closer to the back gate so the winch can be attached to the pull chain. Notting doing, she bucks and won't budge. It's not easy moving a 1300 pound animal .We try to pull her back to reach the  extra inch of chain needed but she pulls her head out of the lock while I'm holding the chain attached to the feet.

The pen gate was wide open and she bolted out of the pen with me holding on and she took off for the alley way. I'm in the back in hot pursuit and had to let go of the chain to save my wrists and fingers, ha,ha,ha. My husband still is trying to get the spare piece of chain from the gate. I'm bringing the cow back to the pen but she saw that the other gate was opened as well and she took off for the area where no cow should go in the small calf area. She made it into the double calf pen that was opened where the cat was bedding her kittens, missing stepping on a kitten by an inch. I quickly grabbed the kitten and threw it in an empty calf pail. 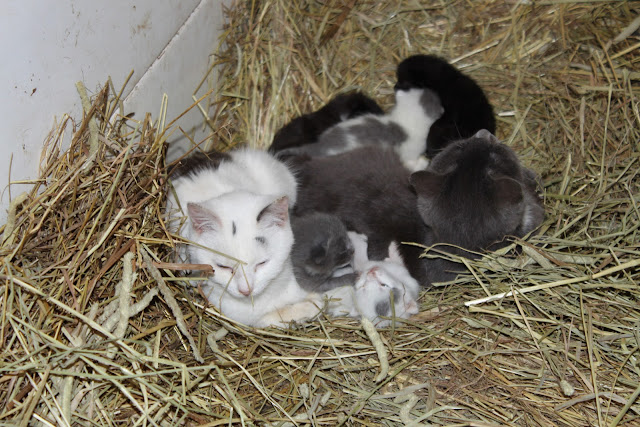 This was from a previous photo of the two cats babysitting the kittens while the mother was taking a break from nursing.


Now my husband was trying to get her to back up in a very tight space not made for a cow. I worried about the mother cat and the 5 kittens.  We got her back to the calving pen, again I enticed her with grain and locked her head in a the other head gate this time. Sometimes a cow has a bigger head and the make adjustment to the width of the head gate lock.

Time is of essence if we want to save the calf and the heifer is not helpful in the least.

The calf was a hard pull out , I got my husband to stop pulling while the calf is hanging half way out so I can clear the mucus from the nostrils and mouth so he can breath. It's much easier to clear the mucus out with the calf upside down as opposed to lifting the calf with his head down. I use paper towels to wipe as much mucus off as I can.

I'm frantically trying to get him to breath and it always feel so good when he takes that first breath and bawls.  The disinfectant is poured on the cow's bottom and the calf umbilical cord is dipped in a stronger solution of iodine to help it dry up and keep it from getting infected.   There was no way the heifer could have delivered the calf on her own. It was a  dry birth.

I vaccinated the calf and gave him some warm colestrum milk from the cow that calved earlier.

After all the commotion was done with, I went to turn the light off and i counted only four kittens in the pen. I told my husband that a small baby kitten is missing. He said, "you  threw it in the calf pail" Sure enough, he was still there safe and sound in the pail. With all this ruckus, the mother cat never moved an inch.

We went home, showered and went to bed.
The end.

Thanks for coming by. I appreciate you comments so much.
Stay safe,
JB