It's hard to know where to begin. It's been over a month and I've been cleaning up ever since, starting with priorities to the less important and I'm far from done and it's planting time already.

The water rose quicker than expected and caught everyone by surprise, even the flood forecasters. A combination of factors was to blame. The full Moon brought the high tide, warmer than the normal temperature causing a lot of snow to melt, lots of rain, high winds and the dam upriver. We were prepared for a big flood but this one was just bigger than expected.

The milking cows were moved to a safe barn, 6 at a time to the main road by the tractor and then taken by truck to the show cattle barn at the Exhibition ground in the city. This went on into the night.

The heifers and calves stayed at the farm and my son Vaughan and his son-in-law had to use a big tractor to go to the farm and use hip-waders to go bed and feed them. They used so much hay just to keep them out of the flood water. The bedding was getting so high that they had to strap boards in front of their pens to keep them from jumping over and drown.  This job of feeding and bedding them was almost an imposible task but they kept the calves and heifers all safe during the long duration of the flood.

There was hay floating everywhere in the barn. They really should have been moved but my husband never realized that the water would get so high. I had one calf that was born one day before the flood, one during the flood and she was called High Water, and one right after the flood. They are all doing well. High water was our first brown heifer calf and she was #600 and became a big celebrity across Canada. She was born at the exhibition barn but the vet had to euthanize her mother three days later because of a muscle injury she received during the moving and couldn't get up.

I don't have photos of the barn and the mess there. It was unbelievable anyway. 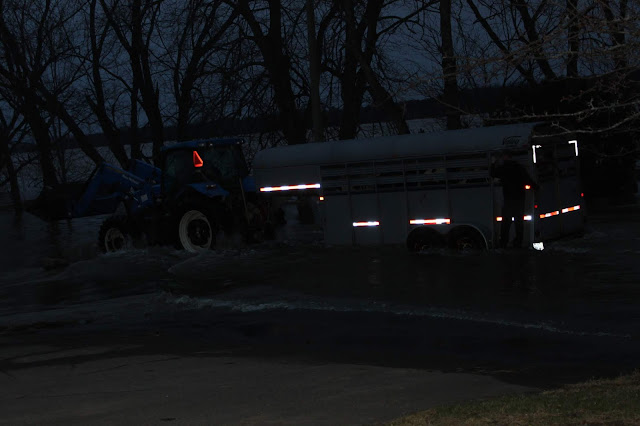 Moving the cattle by a tractor, on the road in front of my house. 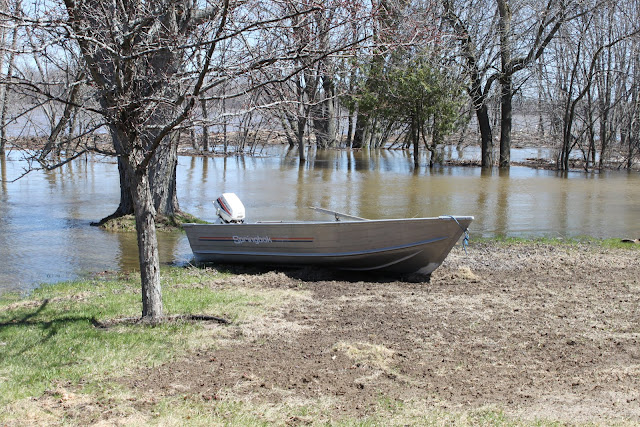 My granddaughter's husband's boat on my front lawn. 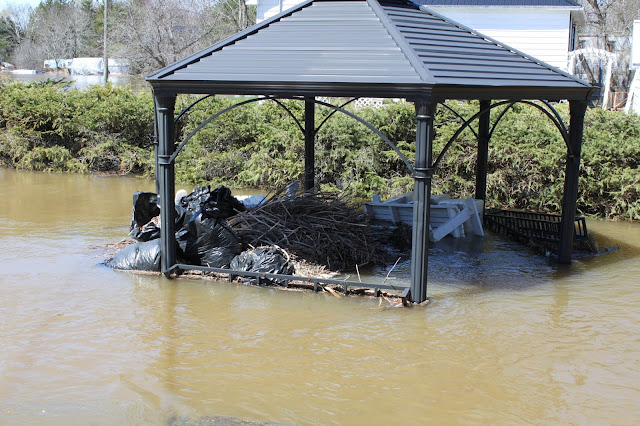 Garden debris that was to be mulched last fall was still contained by the gazebo and my two swins on their side. At least, this time they didn't float across the yard. 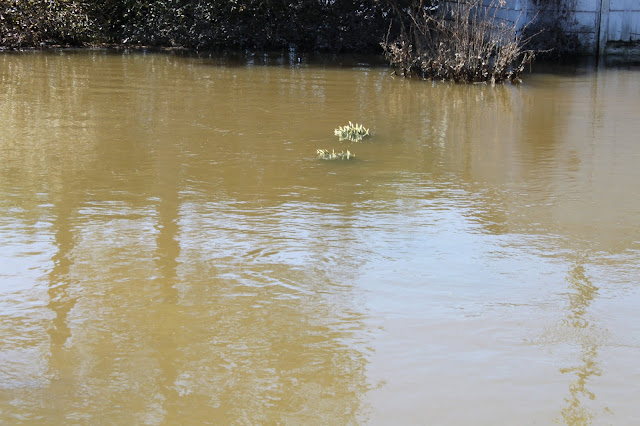 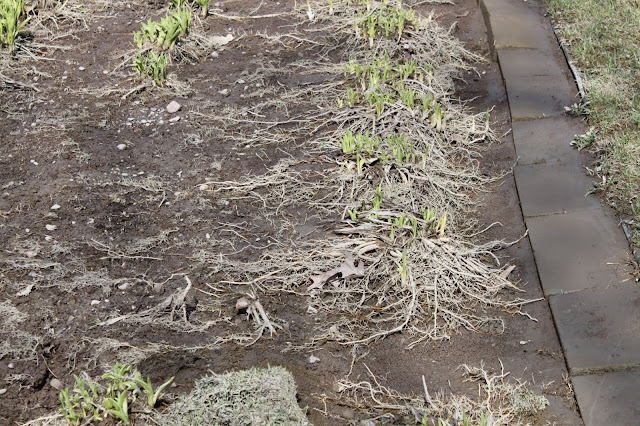 All my long daylily bed lost all the topsoil and the plants are bare roots. 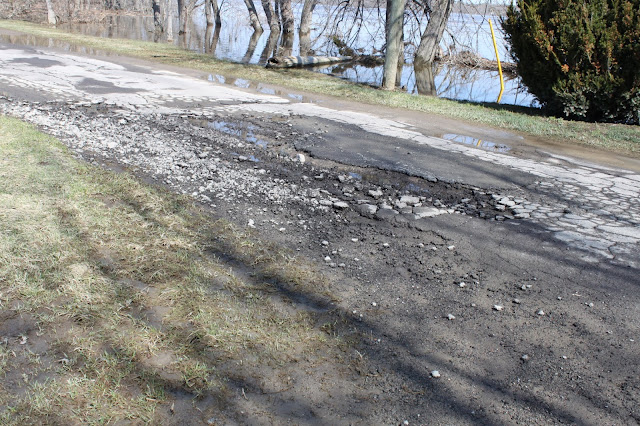 The current was so strong that it tore up the road in front of my house. 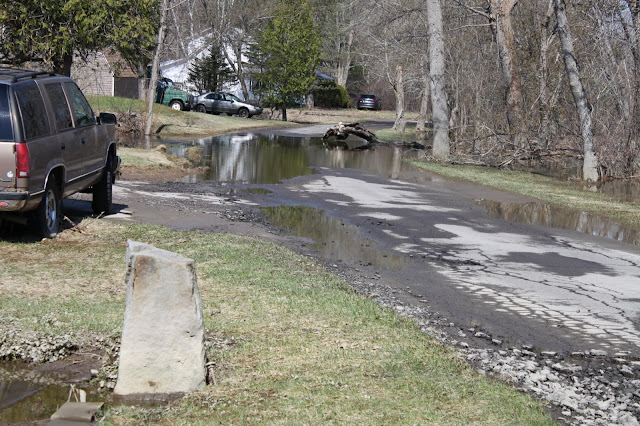 A big tree on the road.  The water came to almost the highest spot on this rock by the lilly garden. 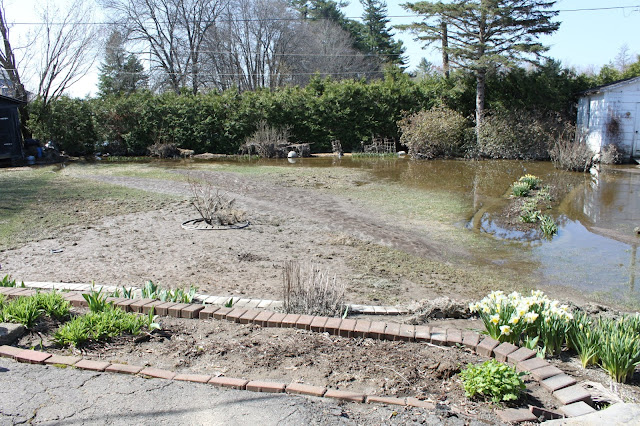 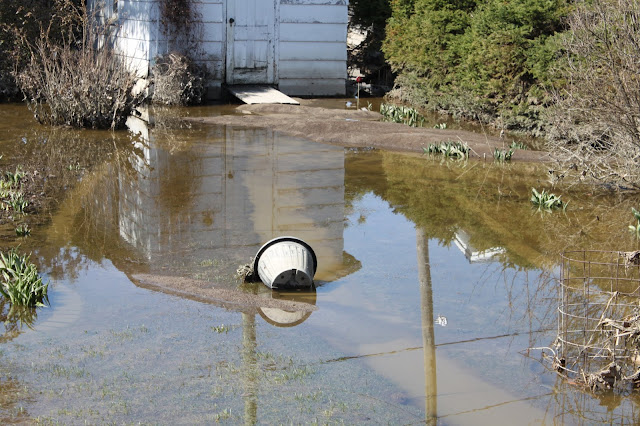 The path to the old shed as the water was receding. 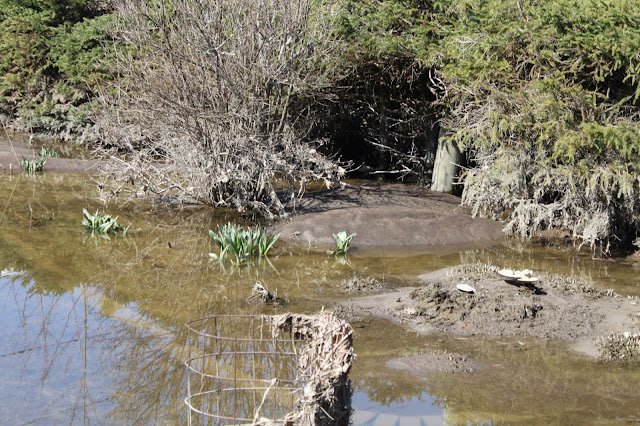 As the water recedes we can see there is a lot of my son's topsoil in my tulip bed. He's not a keen weeder and I  inherited all his weeds and a lot of topsoil and sand as well. That is still not cleaned. 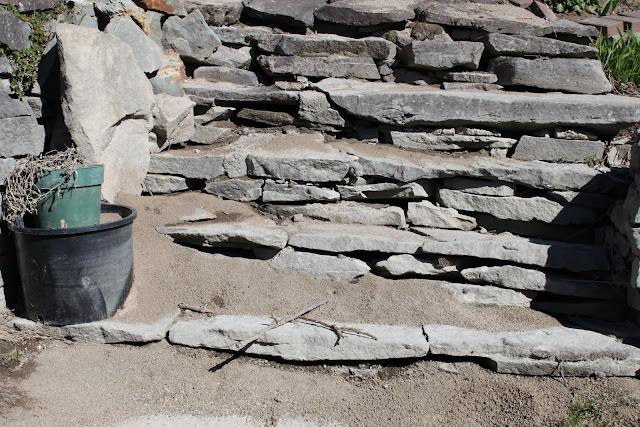 The water was over the top rocks and a lot of sand is still on the steps. 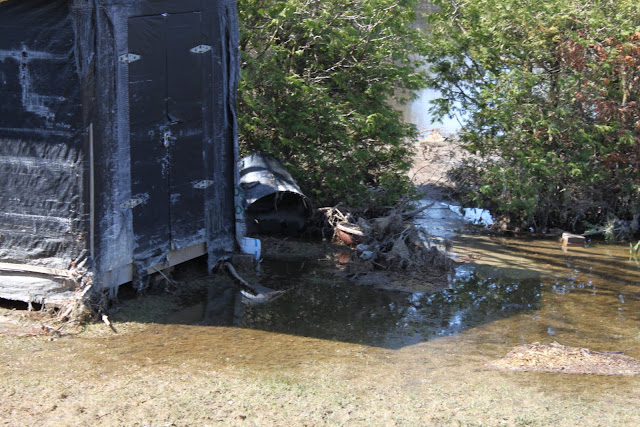 There are driftwood and debris everywhere. I can't show it all because there are too many pictures. 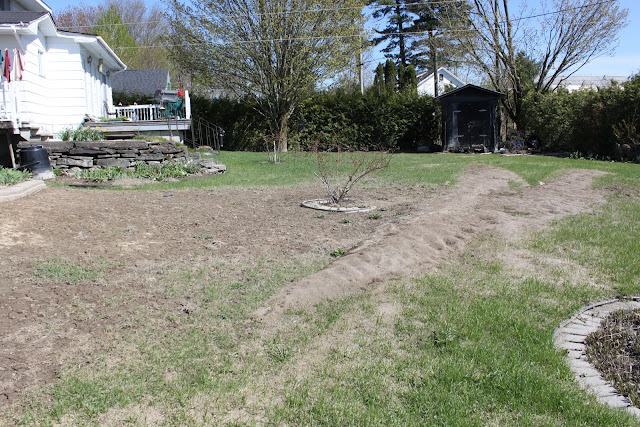 More sandbars on my back lawn. 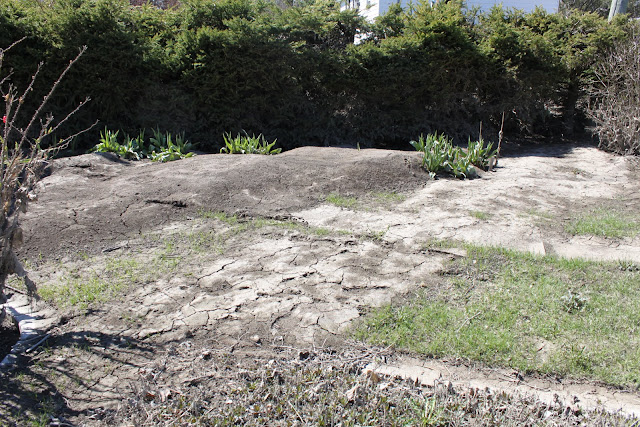 Topsoil and sand in my tulip bed and yard. 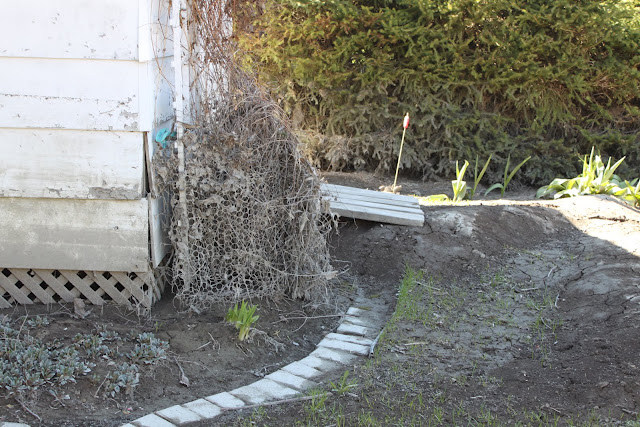 My clematis is wrapped in debris. You can see the water mark on the shed. There is a mess in there and my lawnmower was under water.  Thankfully our mechanic got it going again. 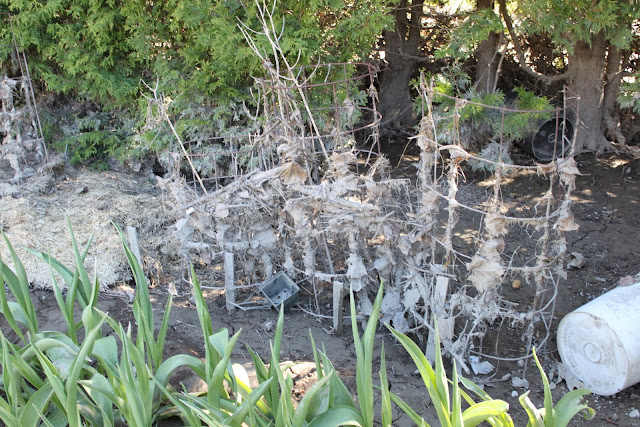 My tall lilies are in those cages but not out of the ground yet in this photo. 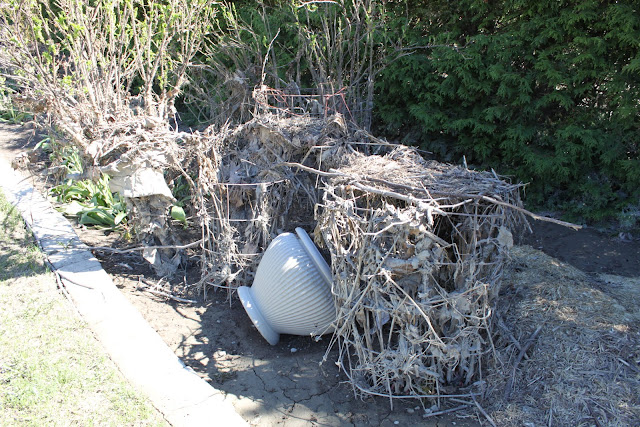 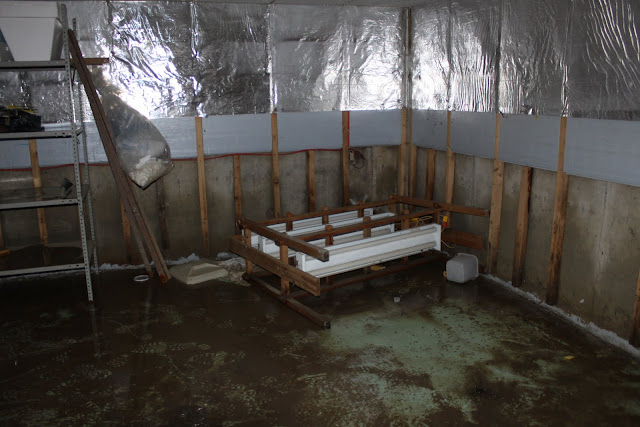 A peek in my basement. My grow lights toppled over. I sprayed a little to show the green floor for contrast. 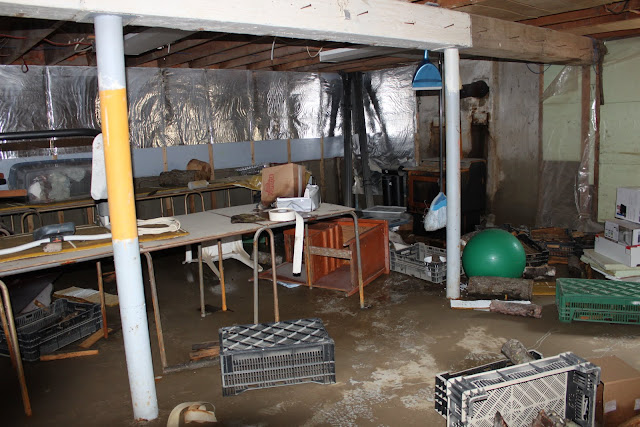 Stuff floated everywhere all over the basement. This is only one section. 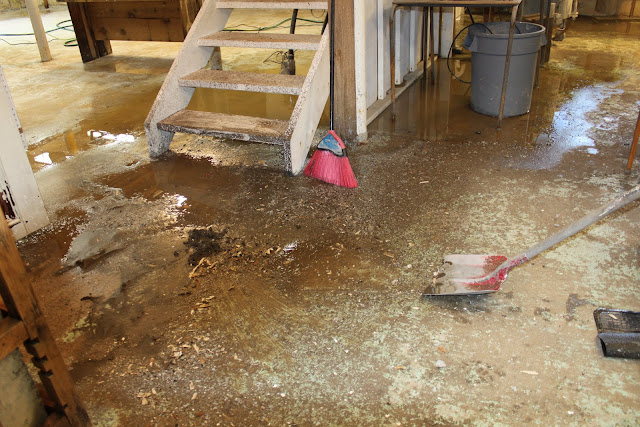 Muck all over the floor 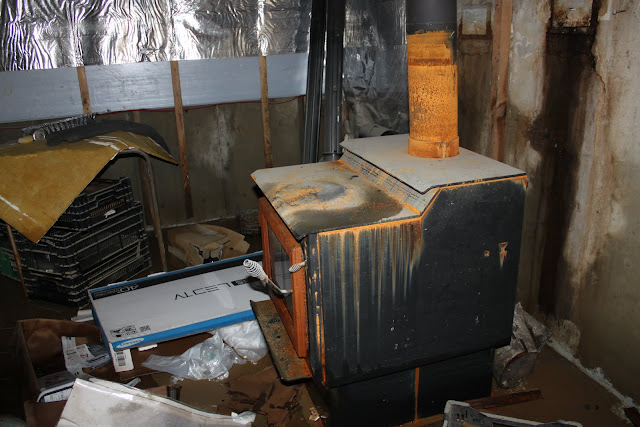 The new stove my husband bought last year for the basement 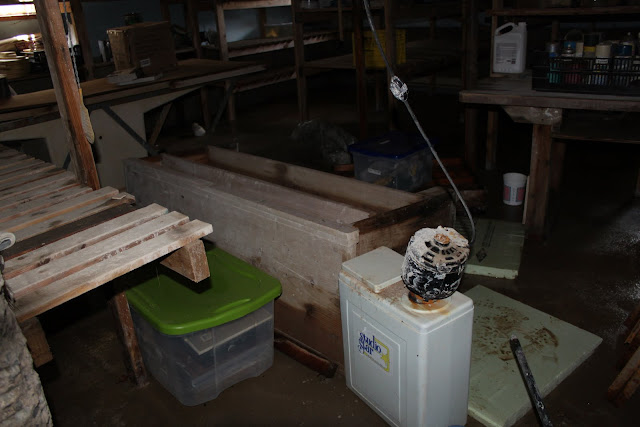 My ceramic pouring room. Workbenches on their sides. The Studio Star slip reclaimer was on the shelf and it was heavy but it floated off the shelf. I wasn't using any of these since I stopped doing ceramics. 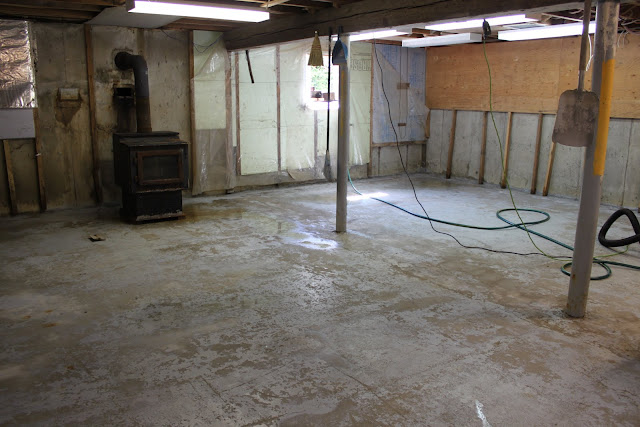 I pressure washed the floor and lots of the paint came off. We tore off the wall covering in the last flood and we decided not to refinish the basement then, a good thing. We use the basement mostly for storage (of stuff we don't need) and lots of holiday decorations. 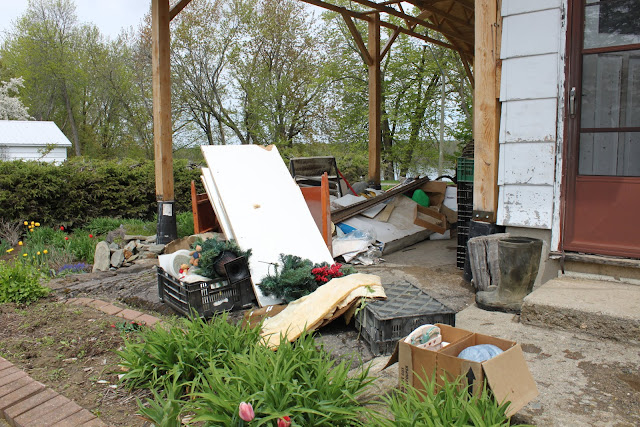 A small portion of the stuff that was removed from the basement for disposal. 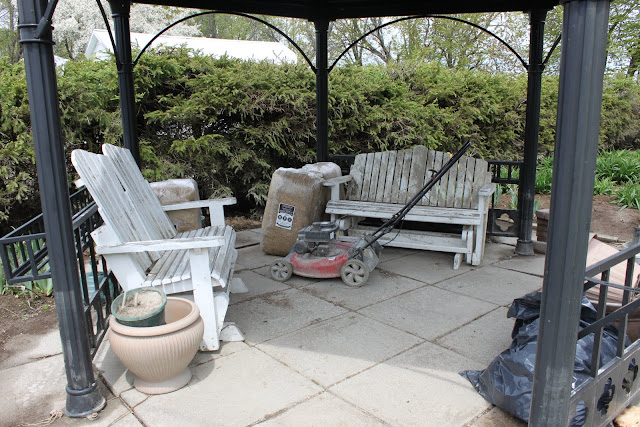 A volunteer cleaned up the debris from the gazebo. That was a big help. All it needs is a good pressure wash to make it look good again. I hope it doesn't peel the paint off the gazebo.

There are so many more photos but this gives you a bit of an idea what I'm dealing with.
It's a year of purging and I've been forced to start early. So much damage but it will all be beautiful again, one thing at a time.
It's way past my bedtime and I'll stop here.
Thanks for looking. Don't feel bad for me, for us, we had way too much stuff.
Hugs, Julia