THE FIDDLEHEADS ARE FINALLY HERE 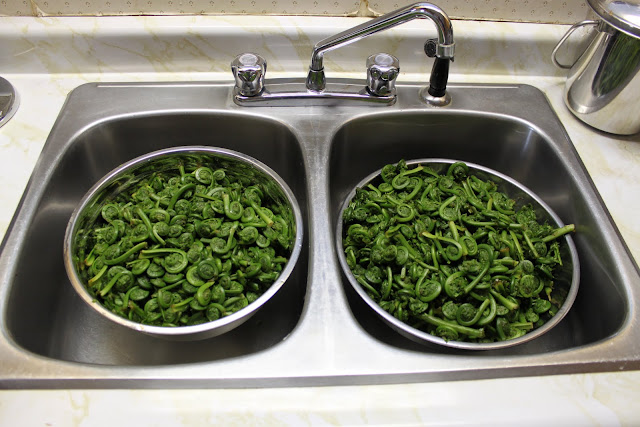 Yesterday my daughter came by to check on the state of her garden before the planting begins  and for a little chat while her son was  at the cadets at the Army Base and I suggested that since she was here maybe she could drive the truck down the fields by the river to go see if the fiddleheads  were out.  We are glad that we did as we found a nice crop and we each picked a large pail and she returned today with her husband to pick some more. I had enough so I opted out to work in my garden instead.

We never have to buy them as they grow on our land. They can be quite expensive at the grocery  store as they are  a delicacy. There is a short window to pick them before the fonts unfurls into a fern.

Today as I was pulling weeds from my vegetable garden I saw three men in a motor boat close to the shore looking through the debris that was floating and I went over to ask them if they were looking for the body of the young man who drowned. They said yes. There were 5 men in a 12 foot canoe who overturned while on their way home from picking fiddleheads.  Three were wearing life jackets and two were not. The three were rescued and one who swam to shore was taken to hospital suffering hypothermia and the other has not been recovered yet.  I can't believe how 5 men fitted in a 12 foot canoe. A few years ago someone was walking by our house and saw a floating body face down  and they were looking in the same place as the current swirls there when the water is high. I hope that they find him soon. It must be very sad for the family.

I worked in my gardens but I'm having difficulty with uploading pictures this evening.  Thanks for stopping by and leaving a comment. Have a great weekend.  JB
Posted by Julia at 7:21 PM 10 comments