There are a lot of other photos of the flood that has not made it here on this post, as there are too many. The first evening of the flood  I had stayed in the city at my daughter because I was baby-sitting and could not make it back home that day when they moved the cattle. So I have no photos.

There were many volunteers who help move approximately  140 head of our cattle. Some went to one farm and the milking cows went to another farm that was about a half hour drive from here.  We were in contact with EMO, (Emergency  Organization) constantly and they were very helpful in orchestrating the cattle rescue. 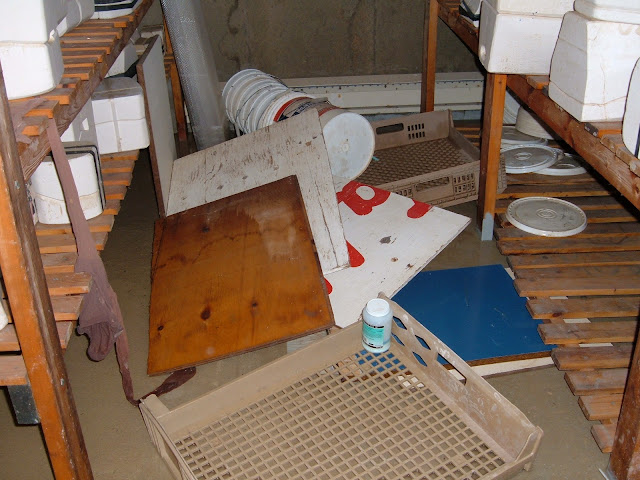 Here, I'll continue with photos of the aftermath of the flood in my basement.  Notice that there were no molds on the lower shelves as these were all moved up on the work tables, even on the pouring table, anywhere where there was available space. The old pantyhose was used to strain reclaimed ceramic slip.  ( I thought that I better explain what they were doing there, lol.) The plywood and rack were used as extra space to dry greenware. 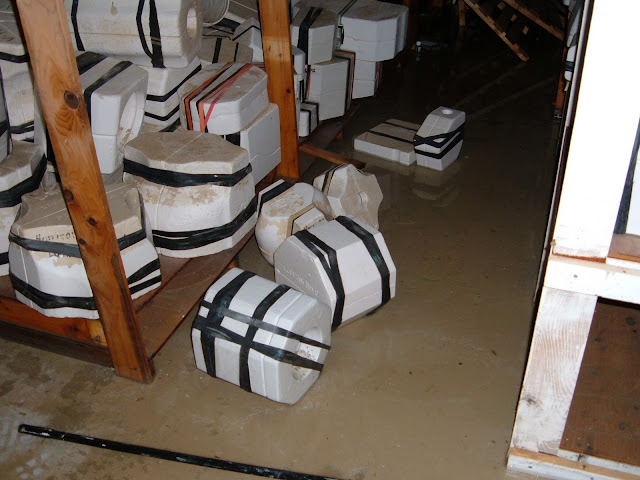 A lots of older molds had no place to be put on higher ground and were left on lower shelves as we thought that we would be able to keep the water at bay like always with the sump pump. 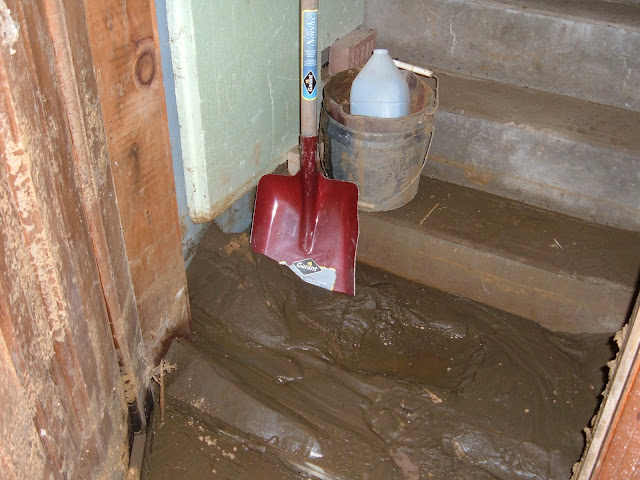 This is the entrance to my ceramic shop from the garage, a lot of the sand and mud that was under the garage floor seeped through small cracks  and made it into the basement. 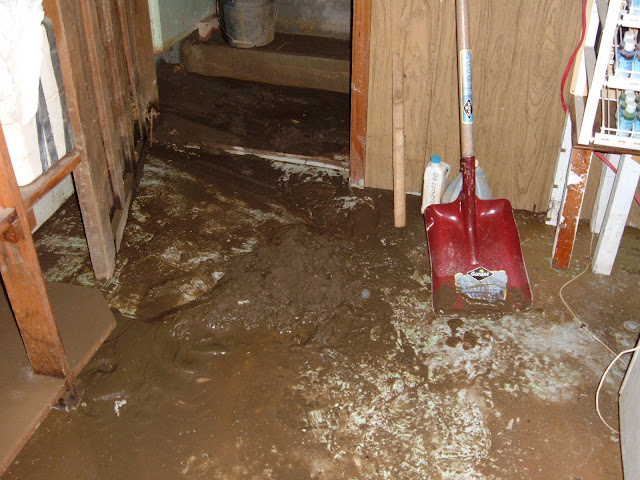 This is what the floor looked like in the shop. 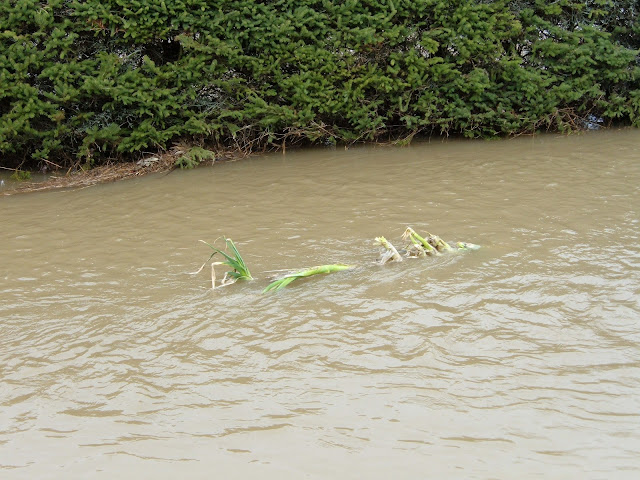 As the water receded in the yard, you can see some of my leeks that were left in the vegetable garden over the winter. 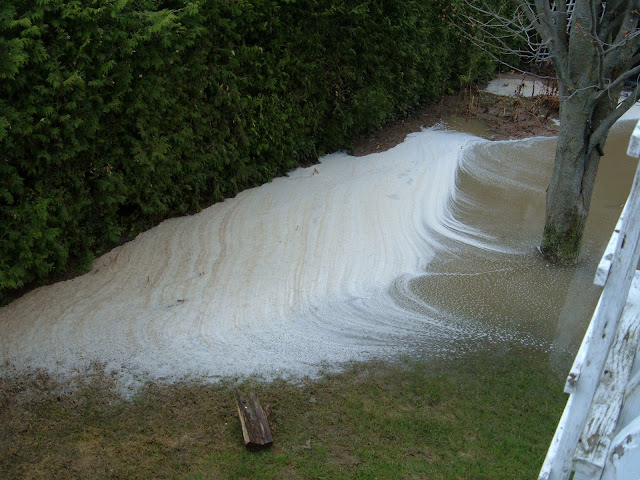 Foam left behind in the yard as the water receded. 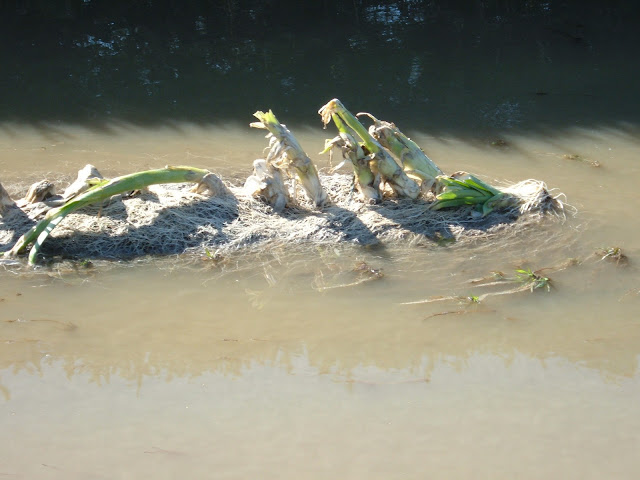 These leeks were planted deep in the ground but now the top soil has washed away and the roots are showing in my vegetable garden. 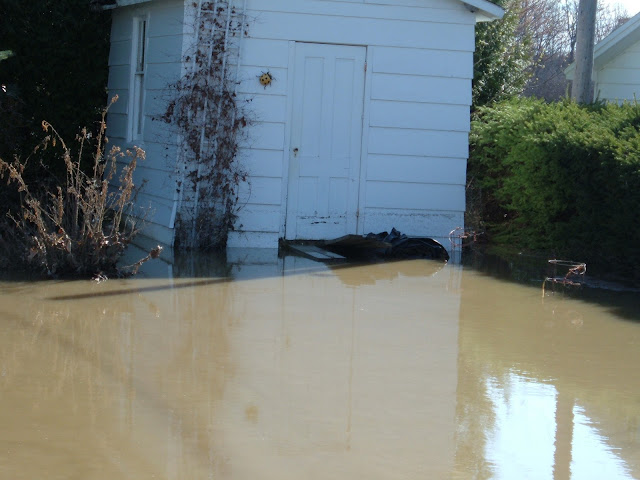 Everything that was on the floor in my garden shed got damaged. Here the water is receding. 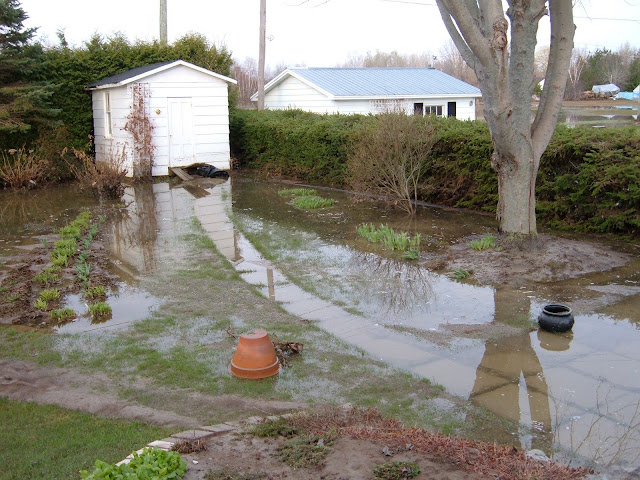 My big flower pot which was full of soil with a perennial in it was overturned and carried away. 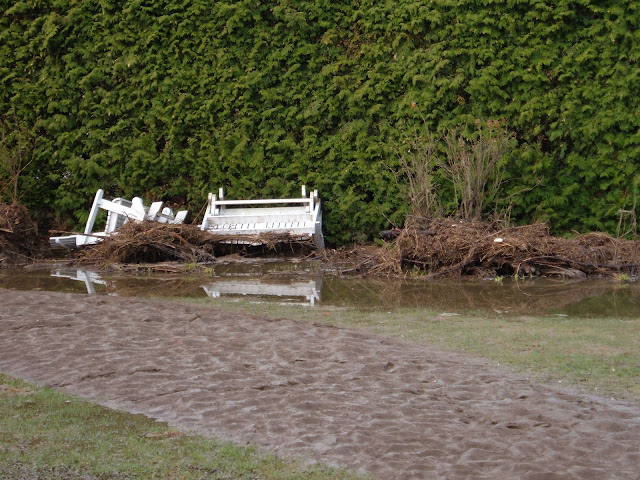 My two wooden  garden swings were swept away from the patio on the previous photo all the way to the back flower bed against the hedge. Notice the sand bar left behind on my back lawn. 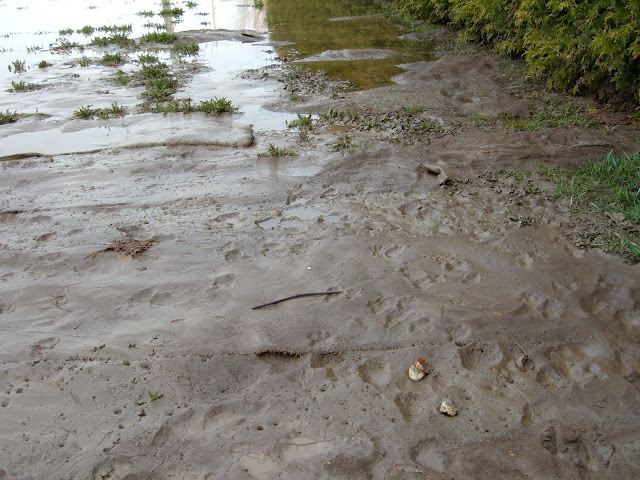 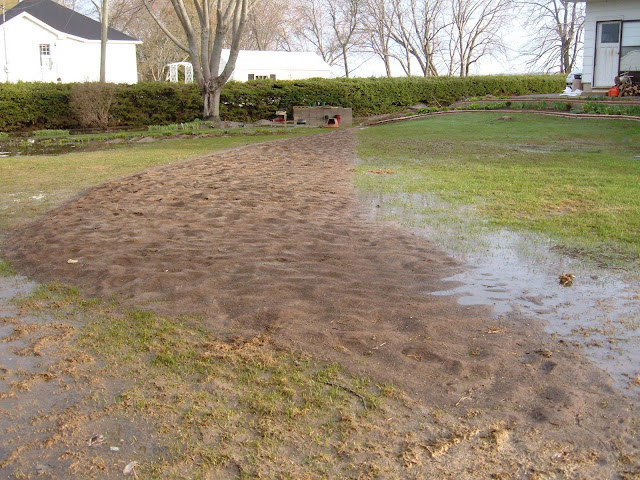 This is another view of the log sandbar left behind on the lawn. 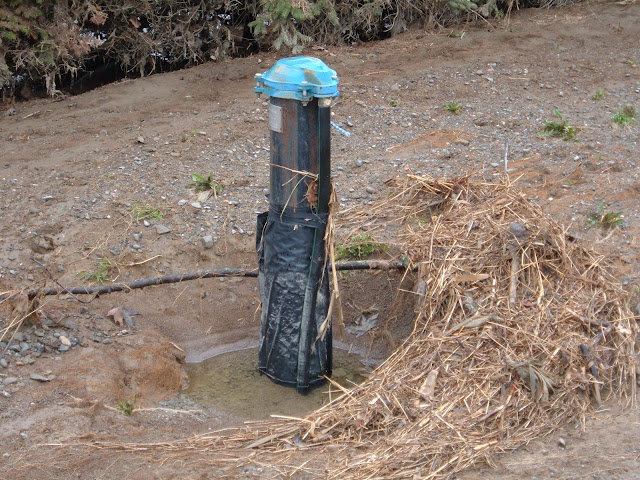 Our new deep well had a lot of erosion around the pipe. Some of the gravel that came up when the well was dug made it's way to the surface as you can see in the next photo. 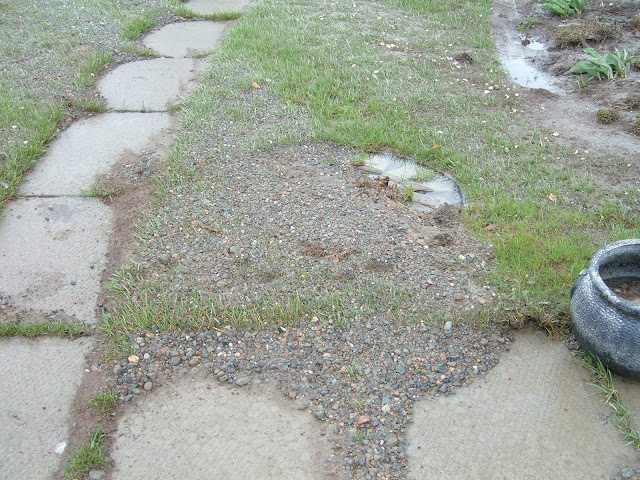 Under all that gravel was my small round free standing peony flower bed. All the gravel had to be removed quickly. To get the rest out I used my leaf blower and it did the trick. 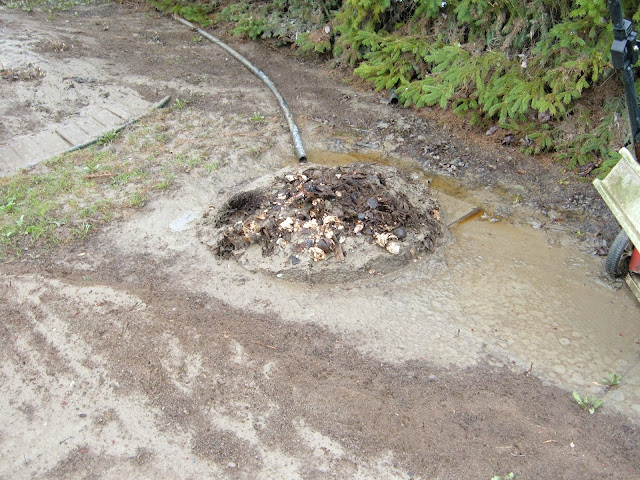 Here is what is left of one of my compost. The compost bin was lifted and floated to the hedge in the back. 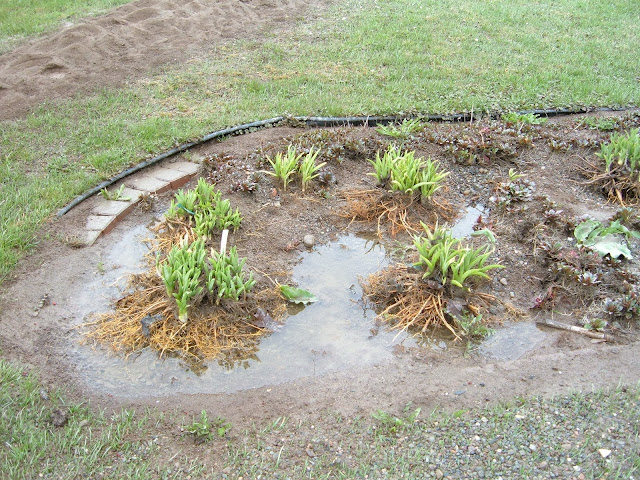 A portion of my day lily flower bed showing all the roots from the soil erosion. The bricks are covered with mud. 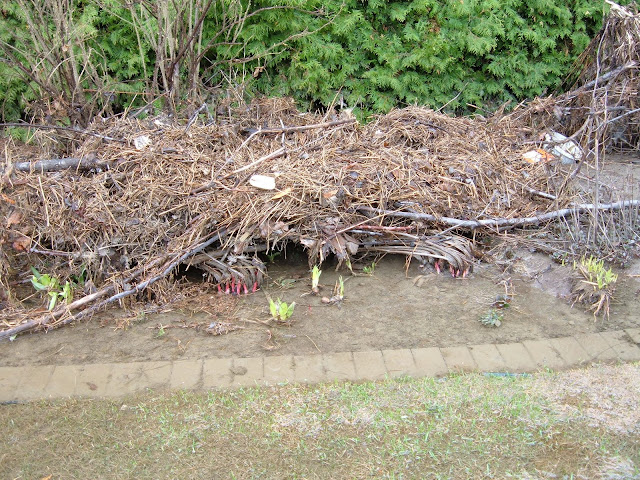 Debris accumulation in my large flower bed. Some peonies and Irises  and day lilies are starting to grow. 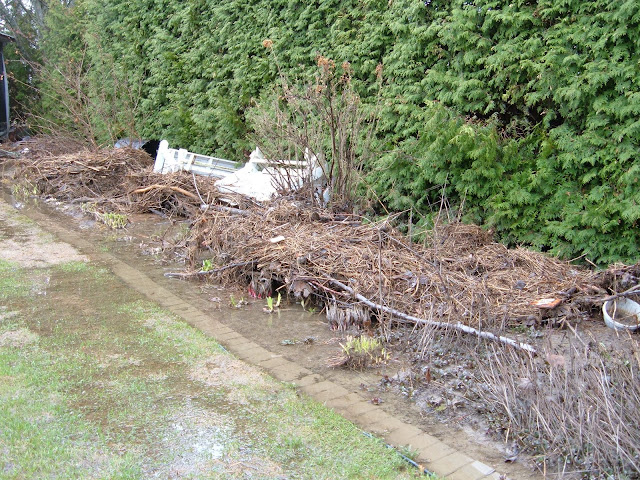 So much mess to clean by myself as the men have the farm  damages to deal with. 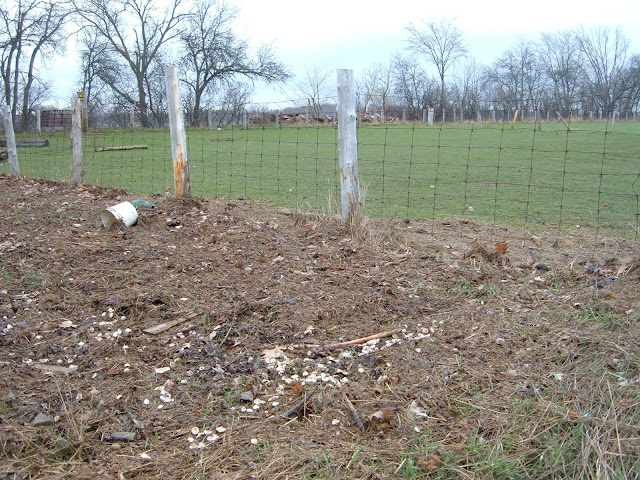 The fence was a barrier for the debris and the horse pasture was spared, 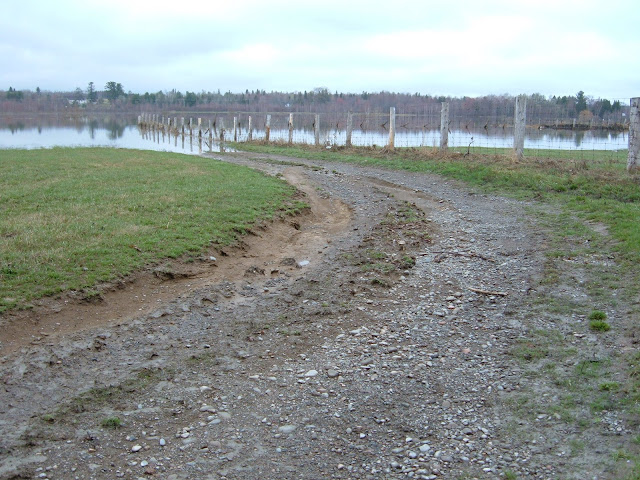 The road going to the fields is about a mile long and it was badly eroded too and in much need of repairs. Some places closer to the river there were large craters that were eroded even though the ground was higher there. 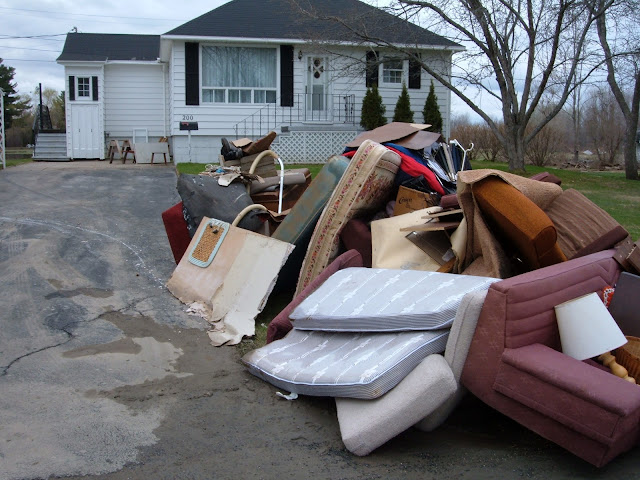 My elderly neighbor had all his basement furniture damaged  in the flood. The poor man had to care for his wife who had Alzheimer and she couldn't cope being away from her familiar surroundings. 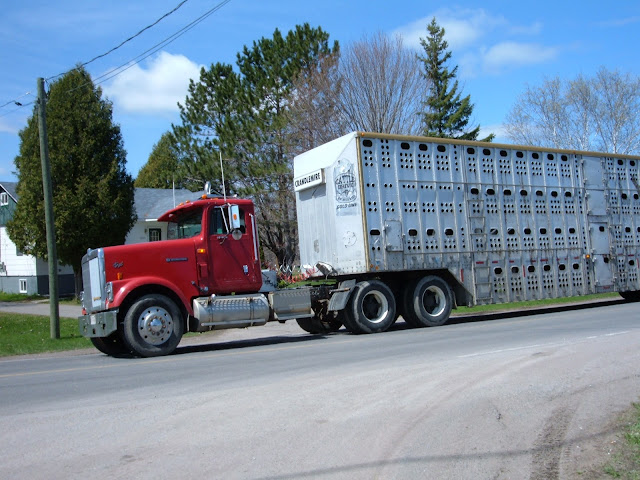 One of the cattle trucks returning some of the cattle after the farm was cleaned and equipment either replaced or repaired  and ready to operate again. 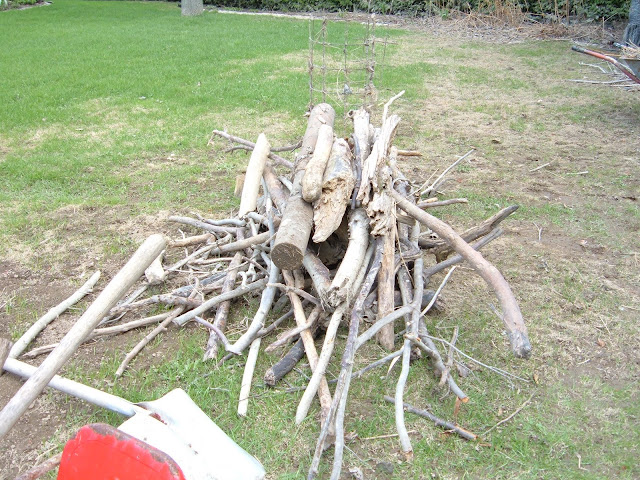 Some drift wood separated from the debris and later dried and cut for fire wood. 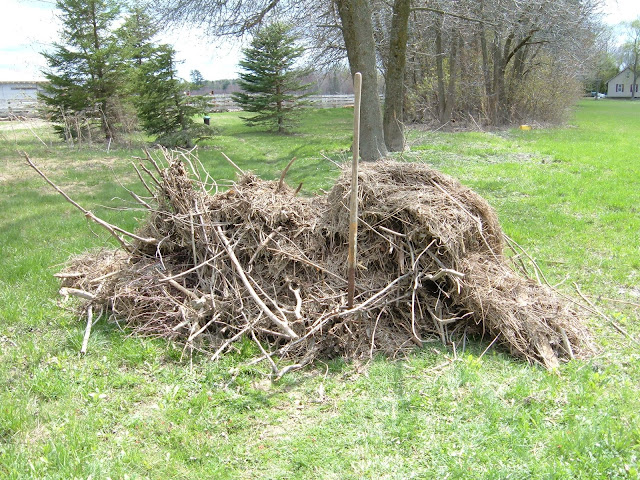 Debris taken from the flower bed and piled in the back awaiting the time that we would have time to deal with it, much later. 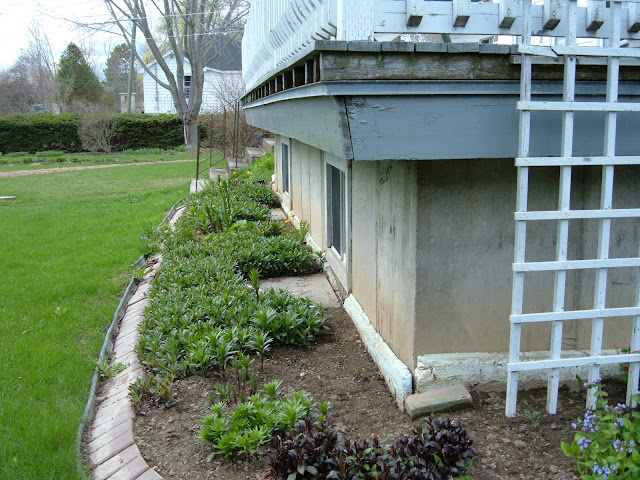 Soon after the water receded the flower bed on higher ground returns to normal spring growth as if nothing happened.  Isn't nature grand? 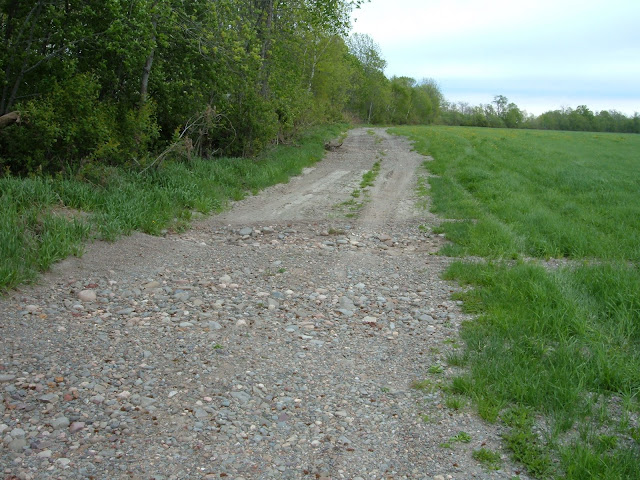 This is the road along the river bank going to the farm  fields, showing some erosion and a large crater in the middle can be seen. There were many craters  on this road six to eight inches deep. The tree line helps protect the land but there were a lot of drift wood that took about two weeks to pick from the fields. We have about 300 acres. The drift wood gathers in the low line areas of the fields.

This is the end of this flood show. I hope that you can get an idea of what a bad flood can do. One of the neighbor's house was condemned and is still sitting vacant and abandoned and is now an eye sore and the owner is staying in another province.  A constant reminder.  JB
Posted by Julia at 3:02 PM