There are many adventures with calves that I don't blog about simply because I don't always have time and then forget about it.  This time I thought I would share even though I don't have pictures.

What the heck, I'll just put an old calf picture for the blog for now.... This calf is big now and is with the heifers outside now. 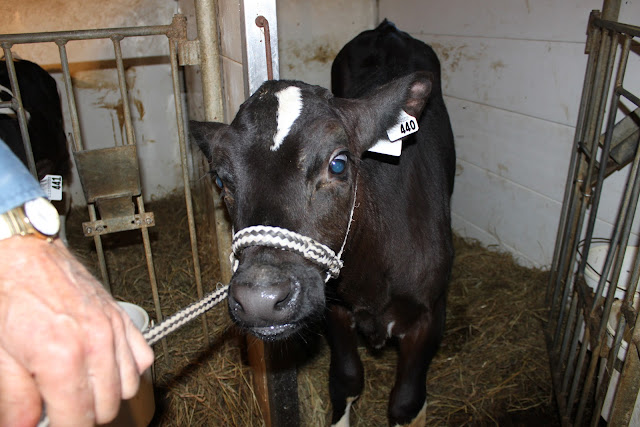 Adventure #1
October has been galloping along and is almost at the half way mark... Working with calves sure has contributed to making time slip by fast. I don't know if that's good or bad.

I can't remember the day last week but I was finishing my work in the morning and my husband had already left the barn  to go to breakfast. I knew that a cow was getting closer to her calving date and I went to check to see how she was doing. I needed to have a pen ready for the calf.

She was laying down and upon getting closer I saw that the calf's head was out and so was his two front feet. I would normally just let nature do its thing but the mother was pushing and her tongue was sticking out about a foot and she was moaning but the calf wasn't coming out. I waited some more  and since I was alone I decided to try to help the mother deliver her first baby myself. I could always call for help. A new born calf weigh around 90 pounds on average. It would be difficult for me to lift dead weight of slippery calf since I only weigh 110 pounds myself.

I grabbed some dry hay and put around the two front feet  for traction because they are very slippery and started pulling  but it wasn't coming out  so I began to lift up on the calf and letting it down and I repeated the procedure until the calf was free inching her way out.. It was breathing so I pulled it out of the cow's way  to make room for her to get up. She was so tired that it took her about 3 minutes to get up. Once up, she cleaned her calf.

Adventure #2
This is another day.
I was finishing off the late afternoon chores when my son came in the section of the barn I work in. I told him that his father had brought all the pregnant cows in from the pasture as it was getting close to freezing now and the cow in the pen may or may not have calved but he didn't see any calf in the field.

My son check the cow but couldn't feel any calf inside so he decided to milk her to see if her milk had come.
She had milk so we decided to go check the far pasture for her calf near the wooded area.

When we came to the culvert over the swamp, we saw little hoof prints and big dog foot prints in the mud and our hearts sank. We prepared ourselves for what we would find. We continued to walk as fast as we could. The fields go back a mile long from the farm to the river and is pretty wide. The pastures are divided with electric fences that can deliver quite a jolt.

After a while we spotted the baby calf sleeping in well hidden  corner of the field against the fence by the wood. As soon as she saw us she galloped at full speed diagonally across the field and within a minute she was out of sight behind a knoll and finally we spotted her by the brook resting. As soon as she saw us again she took off at full speed again. She slipped between the post where the connection are hooked to a current and avoided being shocked. Smart little ass...

I had bursitis that day from all the weeding so I had to slow down a bit and my son told me to keep walking slowly toward a tree in the distance and he would go get the tractor at the farm so he could get her tired out. It was our only chance.
Darkness was coming fast and there was no time to waste. I look back to see if the tractor was coming at a distance, when I turned back to where I last saw her, she was nowhere to be seen.

I kept walking toward the tree and then I saw a sliver of white in the tall grass. She had laid down. I kept my eyes glued on the spot even though I could no longer see the white.

Finally the tractor arrived and up she went at full gallop again. This time she was going in the right direction toward the farm but again she made a diagonal to the field where we first found her. She was getting tired but wouldn't give up.

My son left the tractor and proceeded to chase her on foot. We were afraid that if she got under the wire fence and went in the wood we would loose her. This time she was going in the right direction.
My husband arrived to help after milking and took the tractor back to the farm and reconnected the electric fence that my son had to take down to get through. I kept walking toward the barn. It was almost dark by now and the rain started.

When she saw the small heifers outside by the silos, she went and hid between them but we could see her little short legs. At this point I have one foot on the cement platform by the barn and one foot stuck almost to the top of my boot in mud, going nowhere. My son is busy with roping the calf and can't come to free me.

My son armed with a halter swings it around and lassoed her hind foot and down she came and he quickly wrapped the rope around her two hind feet  rodeo style and stopped her long enough to put the halter around her neck.
Yippee he said, I roped my first calf....lol

My husband came and weeded me out of the mud, hahaha. The calf  was put in a warm bed of hay for the night and she refused to drink the milk. Her number and name is written on her stall . My son was going to call her John Deer  as we had to use the John Deer tractor to chase her and she ran like a deer but since she was a girl, Jane was more fitting than John. So we called Jane Deer.

I was pretty tired when I hit the sack that night and was not such in a hurry to get out of bed in the morning and just realized that in almost 4  years from now, I'll be 70. Will I still be chasing calves then?

Thanks for reading my adventures with the calves these past two weeks. I'll try to have pictures of the two calves in question soon.

I've been planting more daylilies in the very wet vegetable garden as it's getting very late for planting and I don't want to lose them. We had our first frost this morning.
Have a great Sunday everyone.  JB