SOMETHING PINK, WINE, FLOWERS AND WEEDS

I finally remembered to get some pink yarn to knit a scarf this week. Every time I go up town, I'm running late and have to rush home in time to feed the calves. This week I made a special effort to get the yarn, I was late to feed the calves and they were happy when I finally arrived to feed them. 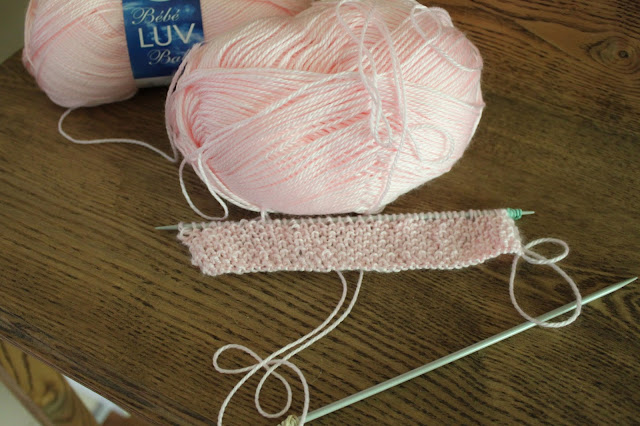 It's a knit one purl one repeated over and over. It's called the seed stitch. I only knit a little bit when I get a chance at night. 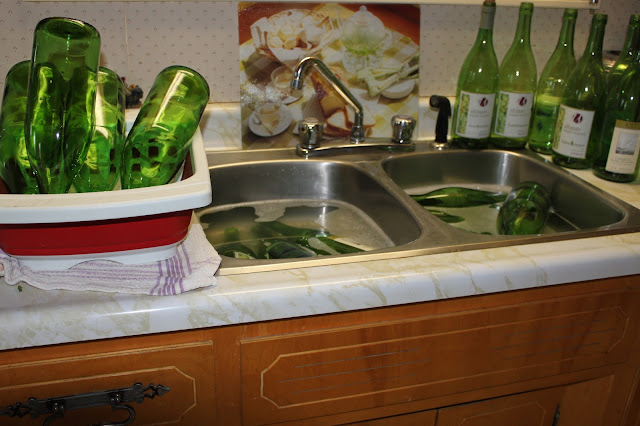 Tonight, I'm washing some wine bottles. This is an older picture that I had on file so I'm using it again.
I wish that I could just wiggle my nose and they would all be sparkling clean.

I'm getting ready for bottling some wine tomorrow. I do it the lazy way at WineKitz. I chose the wine kits  I want, I pay them and they get the batches fermenting. I make a date for bottling and
and tomorrow I'll bring my own clean bottles and they will sterilize them.
This time I'm making a batch of my favorite white wine, Ultimate Estate full bodied Gewurztraminer  and a batch of red wine called Ultimate Valpolicella. 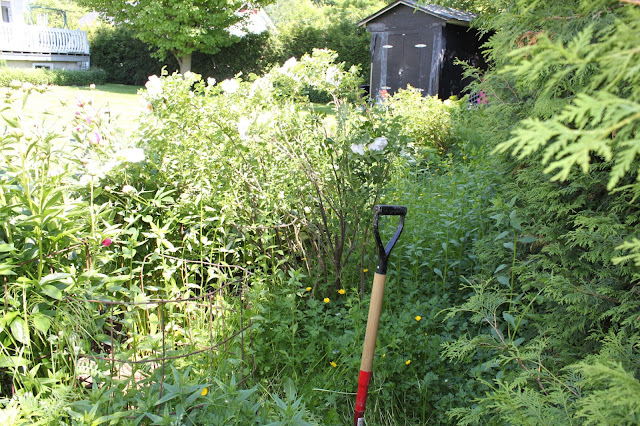 I have a  jungle in my own backyard. I'm pretty sure that I will encounter a lion or monkey in there. I can hear the birds on the wire laughing at me.
This is a flowerbed that runs all along the length of the backyard. It was so hot and sunny and the photo didn't turned out well. 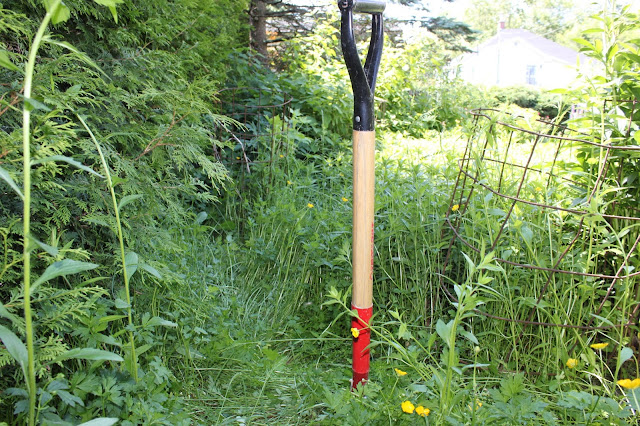 It was a matted mess of weeds of every kinds. Where to begin? The front of the garden was in the sun so I started in the back where it was cooler but still muggy. I armed myself with Deep Wood and braved the lion size mosquitoes. 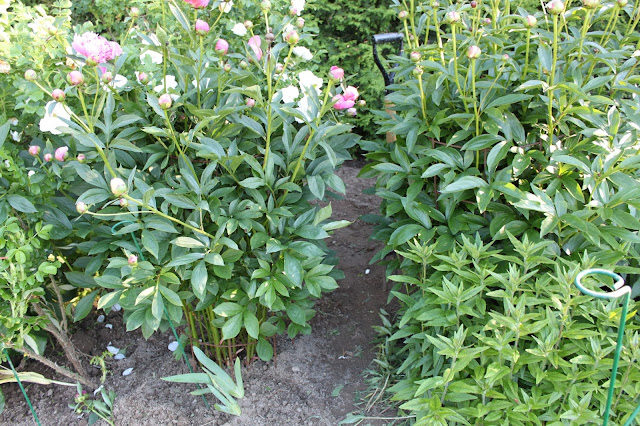 I decided to weed a path from the front so that I could carry my bucket of weeds to the wheelbarrow back and forth and this was the spot I chose between two peonies that were in buds. 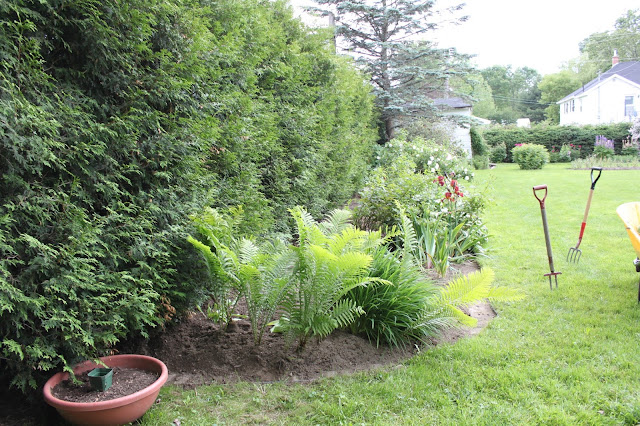 This is the beginning of the garden by  my son's black shed  that is still there since... way back when...
Notice my fiddleheads that I transplanted last spring. I just dug them up from our land by the edge of the river. They grow long stems under ground and out pops up another fiddlehead. They are rather decorative when you let them grow. 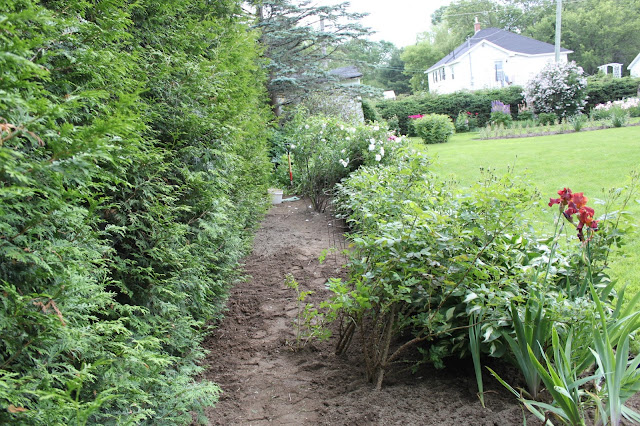 My progress, I now have a clearing in the back of the flowerbed framed by wild cedar  hedge at the back. 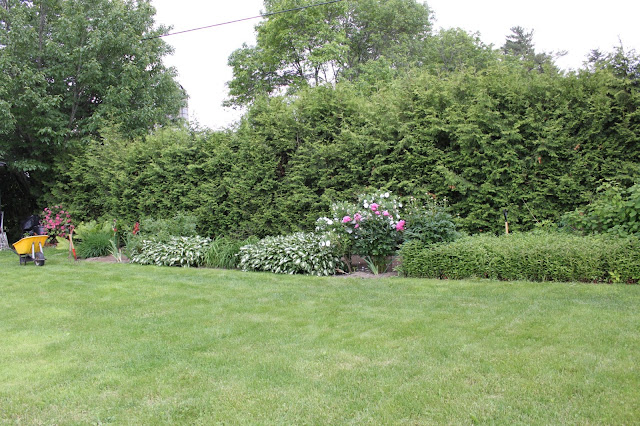 View of the front after some weeding. It's difficult to get the whole bed in the picture. The sun makes everything so pale. 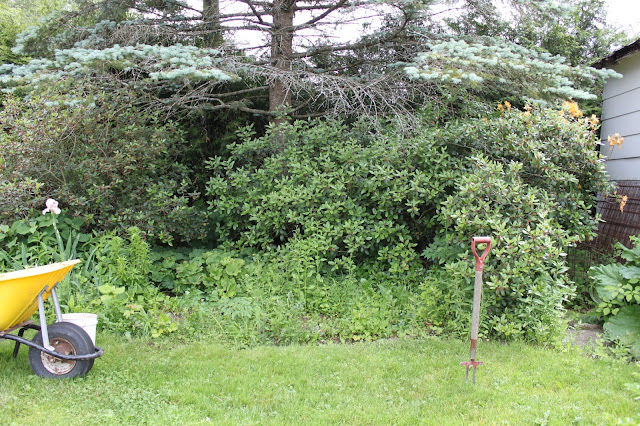 You guessed it, I'm now tackling the other end by the white shed.  My colorado Blue spruce has some dying branches that I will cut off since my Azaleas are growing under. 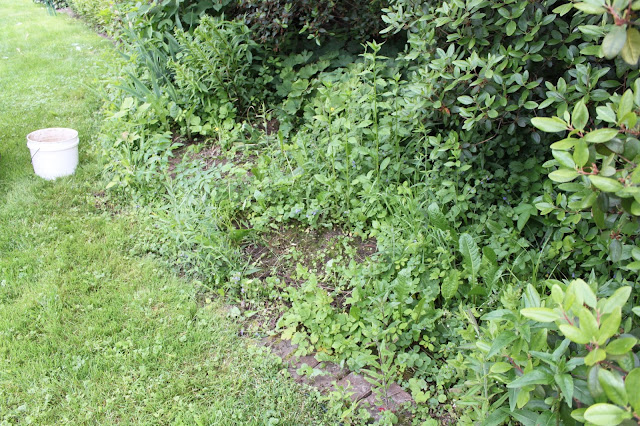 This is the section of my flowerbed that is in front of my Colorado Blue Spruce.
I pulled the very tall weeds by hand so I could see where some perennials were before sticking my fork in.You can see a few paver bricks but most are completely covered with grass. 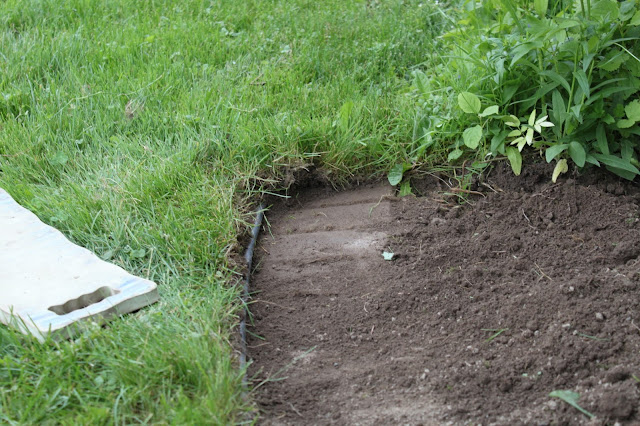 Here I have removed the grass from the paver bricks.
I still have a lot of work to do  It gives you an idea how much this flowerbed needed some rescue. I'm far from done. Got chased in by a big thunder shower  so that I could blog.

I know that I bore you to death with all my weeding but someone has to do it. Just be thankful that you don't have to do it, he,he. 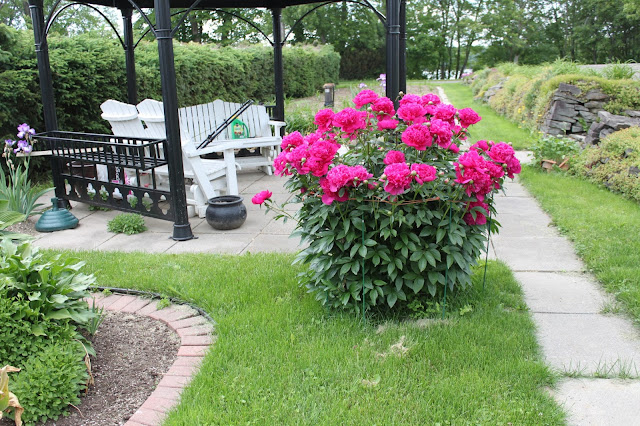 This is why I do it. So I can enjoy the fruit of my labor. Maybe next year I won't have to work so hard. That would be nice but I'm only dreaming.

Have a good week and thanks so much for visiting me. I appreciate that you take the time to leave a comment.

Email ThisBlogThis!Share to TwitterShare to FacebookShare to Pinterest
Labels: Something pink, Wine flowers and weeds